Kanemitsu Bakery Looks at the Options

The ovens of Kanemitsu Bakery remain cold since June, when the Department of Health (DOH) suspended their permit after a complaint was filed. Since then, the bakery has been making some of the sanitation improvements stipulated by the DOH. The operation has not been able to reopen as soon as owner George Kanemitsu had originally hoped, and now he said he’s looking into additional options — including establishing a bakery on Oahu.

In the meantime, work on the Molokai facility continues. The restaurant portion of the business remains open because it operates from a separate, permitted kitchen. 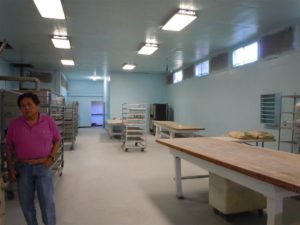 Kanemitsu said he anticipates a visit from DOH inspectors, accompanied by a governor’s representative, in the next couple weeks, after which he said he will have a better idea of a date to re-open. He contacted Rep. Mele Carroll and the governor’s office after he felt the DOH “went too extreme.” He said he hopes the DOH will “be more fair” with a neutral party present during the upcoming inspection.

After a June inspection which resulted in the suspended permit, the DOH came up with a checklist to help the bakery correct sanitation shortfalls. Since then, Kanemitsu said he has completed some of the improvements, including resurfacing of tabletops and floors.

“This is the light at the end of the tunnel,” said Kanemitsu.

“The list of improvements was not, in our view, complex or too expensive,” said Gary Gill, DOH deputy director of the Environmental Health Administration.

Keeping Options Open
While Kanemitsu said he hopes to re-open the Molokai facility soon, he said if the upcoming inspection is not favorable, Kanemitsu said he may look at other options. He said he is already discussing starting a franchise to bake his bread in Honolulu. Molokai resident Waipa Purdy said a friend of his on Oahu in the bakery business contacted him because he heard of the bakery’s troubles and suggested he could help.

“Everybody loves his [Kanemitsu] bread over there,” Purdy said of Oahu. “They know how good that product is.” He said the arrangement could also save shipping and other costs. Kanemitsu — who already ships bread off-island — said he may even consider a mainland franchise.

“I’m gonna try my best to still open here,” Kanemitsu said. He said they’ve gotten lots of calls wondering when the bakery and its famous hot bread will re-open.

Financial Hits
Kanemitsu estimates his business has lost about $50,000 from being closed since June. With the three-day Made in Hawaii festival coming up on Oahu Aug. 17 – an event the bakery usually attends – he said there’s the potential to lose another $30,000 by not going this year if the bakery isn’t running again by then.

The list of improvements required to reinstate their permit to bake would require about $12,000 in materials, without labor costs, Kanemitsu estimated.

“The list included things like having table top surfaces that can be cleaned and sanitized and constructing window screens to prevent insects, birds and rodents from entering the
kitchen area,” said Gill, adding that these are mandatory for any food manufacturing operation.

Kanemitsu said other mandatory changes included refinishing the floors, which has already been completed, and smoothing out unevenness in the walls to dust cannot collect.

In addition, Kanemitsu said the DOH has required that a back section of the building be blocked off from the bakery. Kanemitsu said previous inspections had not considered the area – currently used for storage – to be part of the bakery. But this time, he said, they told him he had to build a wall to separate it.

“I hope to hear the good news soon that the needed improvements have been made so we
can allow the bakery to get back in business,” said Gill.

A History of Violations
A June DOH investigation was completed after the department received an anonymous public complaint on June 15 that alleged insects and other foreign substances were found in their baked goods, according to the DOH.

For the second time in four months, the bakery’s permit was suspended after the inspection found “serious deficiencies in the maintenance and manufacturing practices,” according to DOH.

The bakery’s operations were also suspended for three days in March. A routine annual DOH inspection found similar health violations and the bakery was fined $90,000. Kanemitsu hired an attorney and appealed the fines. A hearing on the fines is scheduled for November.

2 Responses to “Kanemitsu Bakery Looks at the Options”