High in the mountains of Molokai, nature and history grow together in a forest that echoes with the riches of ancient Hawaii. A narrow boardwalk trails through depths of vivid green. Drops of water rest upon leaves and moss, and stillness is interrupted only by the occasional bird or damsel fly. 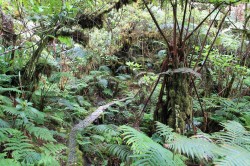 Kamakou Preserve appears to be effortlessly pristine, an abundance of native life remained untouched since ancient times. But the prese
rve as it appears today is a result of 30 years of human determination. It represents an effort to reverse the effects of invasive species, restore native qualities and maintain a connection between culture and nature.

As this year’s Earth Day celebration nears, The Nature Conservancy (TNC) is celebrating 30 years of work on Molokai under the direction of program manager Ed Misaki.

“The ancient, native forests of Kamakou are our living dinosaurs,” Misaki said. “We always look for change, but that place hasn’t changed for millions of years.”Leading Preservation

TNC, a worldwide conservation organization, acquired Kamakou management responsibility through a conservation easement from Molokai Ranch in September, 1982. It was their first preserve in Hawaii, and they needed someone to manage the area. Misaki said what got him the job was his Molokai roots and his love for the aina on which he was born and raised.

“The board [of TNC] understood the importance of having someone who understood Molokai, and I think that’s key to why they took a chance on me,” said Misaki , who had a degree in biology but no resource management experience at the time.

He visited the preserve with his boss on his first day of work and learned about the native plants, something he said wasn’t taught in schools.

“It was really an eye-opener for me,” Misaki said. “The light bulb went on. I could really get into this. It’s a lifetime thing for me to work on.”

He began his new job January 17, 1983. It was a one-man operation ran out of Misaki’s garage and a donated Ford Brono. His first order of business was creating a sign for the preserve, a wooden monument he crafted at the Molokai High School shop.

Since then, Misaki dedicated his career to the preservation of Kamakou and other areas on Molokai that TNC acquired.

“Under Ed’s leadership, the Molokai program has become one of the jewels of our work,” said Suzanne Case, the Conservancy’s Hawaii executive director. “Ed was a pioneer and still is. He shows us what it takes to protect our special places, and how to do it with a lot of heart.”

Though Misaki was the only Molokai TNC staff in the early days of his career, the development of the preserve was a group effort involving community supporters and volunteers.

Construction of boardwalk began in 1985 with the help from volunteers such as Alu Like youth. It takes hikers through pepe`opae bog, a moor of stunted growth and primeval peat moss that dates back 10,000 years, and continues to Pelekunu overlook. Misaki said the boardwalk was the first of its kind and served as a model for other preserves.

Sam Gon, a kahuna kakalaleo on Oahu, was a volunteer at the preserve early in Misaki’s career. He is now senior scientist for TNC in Hawaii. On a hike through the preserve with the two friends, Misaki shared the biological and scientific facts of species found along the boardwalk, while Gon provided their cultural significance.

“You can do that for each plant here,” Gon said. “Stewardship goes hand-in-hand with conservation.”

The ferns that cover the understory of the forest are called the uluhe, and Misaki explained that they serve as a shock absorber for the rain, preventing run-off and damage. Gon shared the ancient beliefs that went beyond science.

“It is said that if you enter the forest with ill will or improper protocol, the uluhe will take you over and you’ll never be seen again,” Gon said.

He said you must have a reason to enter the forest. In the ancient days, the islands’ forested heights were called the wao akua, or realm of the gods. Only a select few entered that realm; among them were the kia manu, or bird catchers, who plucked desired feathers from colorful native birds for royal garments and then released birds unharmed.

Today, students, residents and visitors can enter the forest to learn about its history and valuable ecocystem. 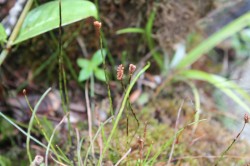 Gon pointed out the toothbrush fern, the oali`i makali`i, which is very small and can easily go unnoticed. However, this species of plant, one of the many Misaki dedicated his career to preserving, had great significance to the ancient Hawaiians.

“It signifies the coming of the Makahiki season,” Gon shared, noting how the plant matured at the start of the annual period of peace and harvest,as a sign from Lono, the god of agriculture and fertility.

Kamakou Preserve is 2,774 acres in size and home to more than 200 species of native plants. The summit, 4,500 feet high, receives 200 inches of rain a year, making the preserve a key watershed area for domestic water use, Misaki said.

One of Misaki’s motivations for managing the preserve is to protect such a key water source for his island. When he first began his work at the preserve, he realized invasive animals such as pigs and ungulates were inhibiting the health of native species.

Misaki said one of the most noticeable improvements to the area since he began his work is that there is less animal damage. Through careful monitoring and control using a plotting method that divides the preserve into 100-meter sections, TNC staff tracks and records the forest’s growth and damage over time. Volunteers and staff conservationists can come to a plot, record what they see in the area, and take note of which plants are dominant, which are missing, which weeds are present and if there are signs of animals. If a plot is made of 90 percent or more native species, then it is classified as very good, Misaki said.

He said Hawaii boasts 95 percent endemism, meaning that almost all of the islands’ native plant and animal species are found nowhere else in the world.

The Kamakou Preserve features species in their unique form, including a viola plant that grows as small tree and what Misaki describes as a briar plant without thorns.

“This is a great example of how evolution has been sped up in Hawaii because of isolation,” Misaki said

TNC began hosting an annual Earth Day celebration on Molokai in 1995.With local entertainment, interactive exhibits and lots of vendors, Earth Day has become a popular community event and a fun night for families.

“Earth Day is really an introduction to conservation,” Misaki said, adding that keiki and adults who first learn about TNC’s efforts at Earth Day could eventually become volunteers and advocates. “It’s really engaging the community with conservation.”

This year’s Earth Day festivities will be April 19 beginning at 5 p.m at the Mitchell Pauole Center.

One Response to “Kamakou: 30 Years of Preservation”