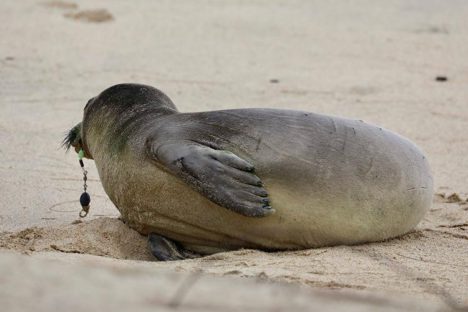 A young Hawaiian monk seal from Kalaupapa got critical surgery to remove a hook lodged in his throat and has been returned safely to the  shores of the remote settlement.

The juvenile male seal, known as RP92, was spotted by National Park Service employees at Kalaupapa during a routine survey with fishing gear trailing from his mouth, according to NOAA Fisheries report.

“We consulted with response partners from the Hawaii Department of Land and Natural Resources, The Marine Mammal Center, and NPS and determined that the seal was most likely suffering from an ingested hook,” stated the NOAA release. “The situation was life threatening, and the life of each seal is critical to this endangered species’ survival.” 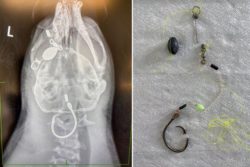 It took teamwork and multiple agencies to coordinate the rescue but the following day, RP92 was picked up from Kalaupapa by a special charter flight for the seal and transported for treatment to The Marine Mammal Center’s Hawaiian monk seal hospital, Ke Kai Ola, on Hawaii Island.

“At the Center, veterinarians performed a tricky extraction of a large, barbed circle hook located just over RP92’s larynx. The hook was in such a challenging position that the team had to cut it on the way out and remove it in two pieces,” according to NOAA. “Fortunately, the veterinary team worked their magic and the hook removal was a success.”

With the hook removed, RP92 began eating more and gained more than 25 pounds during his five-week rehabilitation. 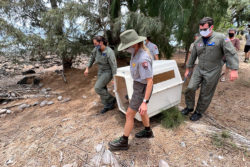 On July 8, after getting veterinary clearance for RP92’s return, the U.S. Coast Guard flew him back to Molokai, where he was released into the wild at his Kalaupapa home. The seal was outfitted with a temporary satellite tag to enable scientists to monitor the seal’s success and gain valuable data to help conservation efforts of other Molokai monk seals, according to NOAA.

“Our team is thrilled to release RP92 back to the wild after he made a full recovery from a complex procedure to remove a swallowed fishing hook, an incredible success story,” says Dr. Sophie Whoriskey, the Center’s Hawaiian Monk Seal Conservation Veterinarian.

Hawaiian monk seals are native and endemic to Hawaii, as well as being highly endangered, with only about 1500 individuals alive today. You can help them by reporting any seal sightings to the NOAA Marine Wildlife Hotline at (888) 256-9840.