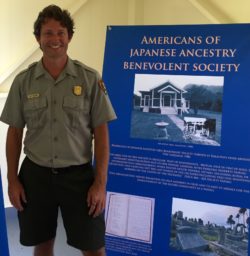 After seven years serving as curator for the museum at Kalaupapa National Historical Park (KNHP) – and hiking the pali trail daily to be with his family topside – T. Scott Williams is leaving Molokai to take a new job as the director of the Aurora History Museum in Colorado.

“It’s been both a privilege and an honor to serve the community at Kalaupapa,” Williams said. “I have become a better human being getting to know the history, culture, and most importantly, the residents of Kalaupapa who generously shared with their mana’o with me. Their history is now preserved for future generations thanks to the National Park Service. ”

KNHP, established by Congress in 1980, is managed by the National Park Service and the Hawaii State Department of Health. KNHP Acting Superintendent Carrie Mardorf said Williams has been the park’s longest serving museum curator. The NPS is sad to see him go, but wishes him the best of luck in his new job, she said. 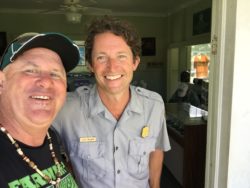 “Since arriving in the park in 2009, he’s worked to preserve the objects, collections, and archives within the park curatorial facility, Hale Malama,” Mardorf said. “He was involved in the final construction of Hale Malama and organized the collections move and reorganization into the new building.”

Since May, Williams has been assisting the park as a visual information specialist, creating new interpretive media, waysides, printed materials, social media posts and website updates for the park with “amazing photographs – photographs that Scott took himself,” said Mardorf, adding he has been a critical member of the Cultural Resource team at the park, working with other park staff.

Williams said the history of Kalaupapa residents is now preserved for future generations thanks to the NPS.

“My family and I would like to thank everyone who showed us the true meaning of the aloha spirit that exists in Kalaupapa and topside Molokai – mahalo nui loa,” he said.