The Native Hawaiian Roll Commission, chaired by former Governor John Waihe`e III, attended the 10th anniversary celebration of Ka `Ohana O Kalaupapa at Kalaupapa on April 27 where Kalaupapa residents were given the opportunity to sign the Kana`iolowalu petition along with the descendants of Kalaupapa and friends who came together for the event.

“We felt it was important for Chair Waihe`e and the Native Hawaiian Roll Commission to visit Kalaupapa for support of the Kana`iolowalu petition just like Ahahui Aloha `Aina came to Kalaupapa in 1897 to give our people the chance to sign the Ku`e petition against annexation,” said Clarence “Boogie” Kahilihiwa, a resident of Kalaupapa for more than 50 years and President of Ka `Ohana O Kalaupapa. “Nearly 700 of our people signed the Ku`e petition, as did thousands of others across Hawaii, opposing annexation in any form.”

The Commission was appointed in 2011 with the mission to register native Hawaiians to reunify in the self-recognition of the unrelinquished sovereignty of Native Hawaiians. Ka `Ohana O Kalaupapa is a nonprofit organization dedicated to honoring the value and dignity of all the estimated 8,000 people who were taken from their families and isolated on the Kalaupapa peninsula because of government policies regarding leprosy. 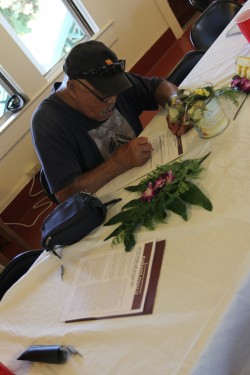 The Commission and staff joined the `Ohana for a prayer service at St. Francis Church followed by the Circle of Remembrance where everyone held hands and spoke aloud the name of someone they were thinking about who died at Kalaupapa. Already, old friendships were being renewed as Chair Waihe`e saw familiar faces from previous visits to Kalaupapa and new friendships were being formed among Commissioners and Kalaupapa residents.

From the church, the Commission gathered at McVeigh Hall where Waihe`e addressed the crowd of about 50. Waihe`e reminisced about his first trip to Kalaupapa, at the invitation of the late Kalaupapa leader Bernard Punikai`a, when Waihe`e was running for Lieutenant Governor. Waihe`e continued his friendship with Punikai`a, who was the founder of Ka `Ohana O Kalaupapa.

“If we Hawaiians look at our family tree, all of us probably have our `ohana here, our `ohana who shared the suffering here,” said Waihe`e, who also had ancestors sent to Kalaupapa.

The former Governor also spoke about the significance of the Kana`iolowalu petition and how it related to the Ku`e petition in 1897 that was signed by more than 21,000 Hawaiians and non-Hawaiians who opposed annexation to the United States. Among those who signed was Waihe`e’s grandfather, John Waihe`e.

“When my grandfather signed that petition, when the kupuna cried when our flag went down, that put something in our DNA,” he said. “The idea of Hawaiian self-governance is as important today as it ever was. …Kana`iolowalu is an invitation to move forward. It’s an invitation to deal with this issue.”

Hawaiians and non-Hawaiians attending the `Ohana meeting were given the opportunity to sign. Kalaupapa descendent Monica K. Bacon of Honolulu signed – just as her great-uncle, Ambrose Hutchison, signed the Ku`e petition at Kalaupapa.

Following a luau with music by slack-key musician Stephen Inglis, the `Ohana took the Commission on a tour of Kalawao, the original settlement on the windward side of the peninsula. Family members shared stories of their ancestors who were members of Siloama and St. Philomena Churches. The Commission then walked across the road from St. Philomena to the peaceful site beneath the cliffs where the Kalaupapa Memorial will be built.

For the past seven years, the `Ohana has been compiling the names of everyone sent to Kalaupapa and other information about residents who were sent there. Since then, the `Ohana has helped hundreds of families reconnect with their Kalaupapa ancestors. Commissioner Robin Puanani Danner and some of the staff members learned of family members who had been sent to Kalaupapa. They were able to visit family gravesites at the cemetery.

“I don’t know what to feel or think, it was like I was pulled here,” said Danner, wiping away tears as she placed lei upon the tombstones. “I have never experienced anything like this. I am now part of this `Ohana.”

“What an amazing day to have the Commissioners here and to help some of them learn about their Kalaupapa ‘ohana,” said Kahilihiwa. “So many Hawaiians had family at Kalaupapa. We are all ‘ohana.”