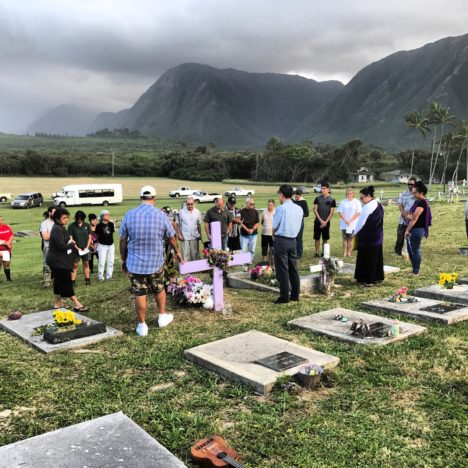 A Kalaupapa legend Edwin “Uncle Pali” Lelepali passed away at the age of 88 on Feb. 7, 2016, and the Kalaupapa community celebrated his one year of passing earlier this month on Tuesday, Feb. 7, in Kalaupapa. A service was held at Kana`ana Hou Church with Pastor Richard Miller and Charles Buck, Conference Minister of the Hawaii Conference of the United Church of Christ, and along with many of his friends. Uncle Pali’s favorite music was played by the Kalaupapa Backyard Band and stories were shared by many. After the service and music, everyone headed to the grave site at Papaloa Cemetery for more beautiful words, music, hula and poetry. Finally, everyone headed to Fuesaina’s Bar for wonderful dinner and a jam session and, of course for Pali, a volleyball game.

Lelepali had a difficult beginning. His mother died while giving birth to him, and he was diagnosed with Hansen’s disease as a child. He was sent to Kalaupapa when he was 14 years old.

Miller worked in Kalaupapa many years and knew Lelepali well.

“Pali, or Uncle Pali as he eventually came to be called, was a resident of the section of the Kalaupapa Settlement called McVeigh Home for over 70 years, moving from the boys’ dormitory to one house and another until he settled in the home which would be his for over 50 years,” said Miller.

He added Lelepali married twice and outlived both wives.  He rests now among his wives and his dogs in Papaloa cemetery.

Lelapali loved Kalaupapa and was remembered by many for his friendly, joyful spirit.

“If ever there was a man who rose above his circumstance to shine a light of rascally joy on the world, it was Edwin Lelepali,” said Miller. “No one who knew him lacks some story of his smile, his goodness, and his famous tricks.  When the burdens of life beset him, as they do everyone sometime, Pali turned to God in whom he worshipped with true faith and in whom he found the comfort and strength to get him through.”

Buck, the Conference Minister of the Hawaii Conference of the United Church of Christ, overseeing 130 congregations around Hawaii and on Molokai, recalled Lelepali fondly.

“Kalaupapa is definitely not the same without Pali, emptier and quieter definitely,” he said. “But Pali’s influence and so many of the memories, some funny and others that move us to tears, are still all over the place and etched deep in our hearts.”

Buck said it was great to get the community together “to sing the songs he loved, to play volleyball and imagine him refereeing again, and to share some of his favorite foods and drink.”

“I think we all needed a way to say how much we miss him, love him and thank God for him!” said Buck, who has been coming to Kalaupapa since 2004 and said Lelepali was the first person he ever met in the settlement.

“[In Kalaupapa] the homes, the churches, the store, all have held within their walls generations of people sent against their will to live their lives away from the rest of the world because of the disease which had struck them,” explained Miller. “The presence of those generations is pervasive in Kalaupapa, is inescapable.  But the same churches which saw so many funerals also saw weddings, and Christmas celebrations, and provided a comforting haven in which people talked with God.  In the hearts of many people is strength of human spirit which elevates them above their situation to let the joy of life shine through them like golden sunlight.  Such a man was Edwin Lelepali, whom we all knew as ‘Pali.’”

Edwin Lelepali was and always will be one of the treasures of Kalaupapa and Miller and his congregation will make sure of that.

“The music he played and sang will always reverberate in the serenity of Kalaupapa, and the spirit of Edwin Lelepali will never leave his beloved home,” he said.