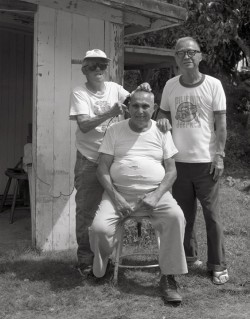 “The Haircut.” Longtime Kalaupapa resident Kenso Seki (left) cuts the hair of John Cambra with Herbert Hayase looking on in this photo by Wayne Levin taken in 1986.

“A Reflection of Kalaupapa: Past, Present and Future,” a photo exhibit sponsored by Ka `Ohana O Kalaupapa, will open with a blessing on Wednesday, Aug. 13, at 11:30 a.m. at historic Paschoal Hall in Kalaupapa. The free exhibit, hosted by Kalaupapa National Historical Park, will be available for viewing on days to be determined through Sept. 12.

The `Ohana will also present a narrated slide show on “The Restoration of Family Ties,” on Tuesday, Aug. 12, at 5:30 p.m. at McVeigh Hall. This presentation, open to the community, features the inspiring work of Ka `Ohana O Kalaupapa in helping families reconnect with their Kalaupapa ancestors.

Ka `Ohana O Kalaupapa President Clarence “Boogie” Kahilihiwa said walking into the exhibit will be like welcoming back all the people in the exhibit, most of whom have passed away.

“The exhibit will have the most meaning here where all of these people lived and died,” said Kahilihiwa, a Kalaupapa resident for more than 50 years.

The exhibit was produced three years ago and was on display in art galleries or large public venues on Oahu, Maui and Hawaii Island. `Ohana Coordinator Valerie Monson said during that time, she heard comments from people on less-accessible islands who said their communities always are bypassed for these important exhibits about Hawaii.

“Every community lost people to Kalaupapa so the `Ohana feels it’s important to reach out to as many places as possible,” said Monson. The `Ohana obtained funding to build portable display walls to hang the photos so communities without large galleries could host the exhibit. The materials arrived on the Kalaupapa barge last weekend.

After Kalaupapa, the exhibit will open at the Molokai Museum and Cultural Center in Kalae in late September.

Ka `Ohana O Kalaupapa is a nonprofit organization dedicated to honoring and remembering the estimated 8,000 individuals who were sent to Kalaupapa because of government polices regarding leprosy (also known as Hansen’s disease). The `Ohana was established in 2003 at the request of the Kalaupapa community to advocate for the residents, develop educational programs, reach out to family members/descendants of those sent to Kalaupapa and work with other organization and agencies to preserve the important history. Its mission is: “E Ho`ohanohano a E Ho`omau….To Honor and To Perpetuate.”

Monson thanked Kalaupapa National Historical Park, especially Superintendent Erika Stein-Espaniola, as well as Department of Health Administrator Mark Miller. The exhibit is made possible by grants and in-kind donations from the Hawaii Tourism Authority, the Office of Hawaiian Affairs and Young Brothers, Ltd.

For more information, call Monson at 808-573-2746 or email vmonson@kalaupapaohana.org.