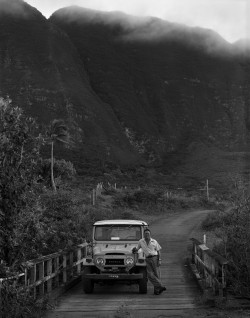 Danny Hashimoto pauses as he delivers the community’s mail and newspapers, 1985. Photo by Wayne Levin.

“A Reflection of Kalaupapa: Past, Present and Future,” an exhibit of about 100 photographs of Kalaupapa and her people will open at the Molokai Museum and Cultural Center in Kalae on Saturday, Sept. 27, with a blessing at 10 a.m.

Opening day festivities, open to the public, will run through 2 p.m. The museum will waive entry fees on that day only. The exhibit will be on display at the museum through Aug. 29, 2015.

The exhibit was produced by Ka `Ohana O Kalaupapa, a nonprofit that includes Kalaupapa residents, family members/descendants and friends of the community. The show recently wrapped up a month at Kalaupapa’s Paschoal Hall, where it drew 572 visitors – an astonishing number for such a small community. The exhibit was popular not only with visitors on Damien Tours, but also among residents, staff and overnight visitors or volunteers.

“It was wonderful to see the enthusiasm from so many people who wanted to view the exhibit,” said `Ohana President Boogie Kahilihiwa, a Kalaupapa resident for more than 50 years, whose photograph is featured. “We hope the people on topside [Molokai] are just as interested in seeing our exhibit – they will probably see pictures of old friends and learn about other people they have only heard about.”

Many of the photos were taken by acclaimed photographer Wayne Levin who began visiting Kalaupapa in 1984. Levin will attend the opening as will others who have strong ties to Kalaupapa.

It is hoped that school groups – especially Hawaiian history classes – and kupuna organizations can visit to learn more about Kalaupapa history and the people who helped create that history.

The exhibit is dedicated to the late Sarah Miala Meyer Kaopuiki Benjamin, whose childhood home is next to the museum, the former Meyer Sugar Mill. Sarah was sent to Kalaupapa in 1942 after she was diagnosed with leprosy, or Hansen’s disease. She became a second mother to many youngsters who were taken from their families and isolated at Kalaupapa. She was also a leader in Kanaana Hou Church and respected for her knowledge of Hawaiian traditions, language and medicinal plants.  Sarah is buried near the museum in the Meyer Family Cemetery, where the opening ceremonies on Saturday will begin.

“It’s especially fitting that this exhibit is here because of our close connection to Aunty Miala [Sarah],” said Noelani Meyer Keliikipi, executive director of the Molokai Museum and Cultural Center, and great-niece of Sarah. “We’re pleased to be able to honor all the people of Kalaupapa and their families with this exhibit.”

The `Ohana produced a new 10-minute video to introduce exhibit visitors to the people of Kalaupapa. Visitors will also be given an exhibit guide, at no cost, that contains more information about the history of Kalaupapa based on the words of the people themselves.

For more information, call the Molokai Museum and Cultural Center at 567-6436.