Not only was Kalaupapa historically known as a place of exile for patients of Hansen’s disease, but the peninsula was also used as a bombing range during the 1940s. As with other Formerly Used Defense Sites (FUDs) around the state, efforts are being made to remove the unexploded ordnance. This fall, crews will be working in Kalaupapa to clean up the area. 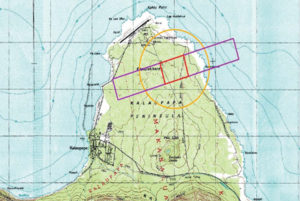 The Makanalua Bombing Range on the Kalaupapa peninsula. Courtesy Army Corps of Engineers.

A 937-acre region on the northwest side of the peninsula is known as the Makanalua Bombing Range. It was used by the U.S. Navy for bombing and rocket training from 1941 to 1946. Now, the Army Corps of Engineers, the Native Hawaiian Veterans, a munitions response company called USA Environmental and others are spearheading the clean-up. They met with the Kalaupapa community last week to discuss their plans.

Robert Nore of USA Environmental said a preliminary assessment in 1999 revealed the presence of three to five-pound practice bombs in the area. Soil samples detected metals like lead, zinc and copper, but in levels well below that of human risk, added Nore.

A series of meetings with stakeholders including land owner Department of Hawaiian Homelands and the National Park Service have yielded a work plan to remove munitions. Community meetings, both with Kalaupapa residents and the topside Molokai community, will be held periodically to receive input and inform the community of activity plans.

From September through November of this year, crews are scheduled remove munitions from the Makanalua Bombing Range. All explosives will be evaluated and, if necessary, safely detonated by explosives experts. The plan calls for both archeologists and biologists to accompany the teams to ensure natural and cultural resources will not be disturbed.

Army Corps of Engineers officials emphasize safety for those living near former bombing ranges. They advise residents use the 3 R’s if they find unexploded ordnance: recognize, retreat and report to local authorities.

Army Corps representatives said for Kalaupapa residents who have found and kept old bombs as souvenirs, do not move them, but wait for experts to arrive in the fall. Explosives technicians will inspect them and if necessary, remove and detonate them safely.