Kalaupapa Memorial to Get $5M 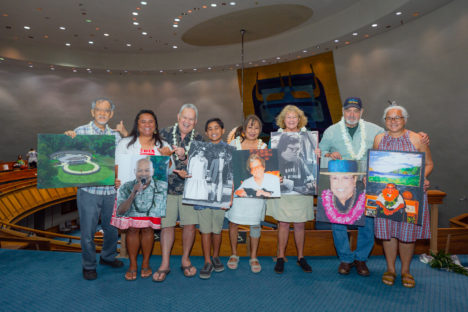 For almost 20 years, families and members of nonprofit Ka ‘Ohana O Kalaupapa have been working to make the Kalaupapa Memorial a reality, honoring the men, women and children who were taken from their families and exiled on the peninsula because they were diagnosed with Hansen’s disease. That dream came one step closer to completion when the Hawaii State Legislature approved $5 million in funding for design, planning and construction of the memorial on May 5.

“Today was monumental for all those exiled to Kalaupapa,” said Charmaine Woodward, President of the Board of Directors of Ka ‘Ohana O Kalaupapa. “Family members will now be able to see the names of the 8,000 patients, feel their presence, sit in Kalawao, reflect, and hopefully begin to heal. Generations after us will be able to visit this memorial and remember the sacrifice our ancestors made, remember their resilience, determination, talents, and — most of all — their aloha.”

In 2009, after approval by U.S. Congress, President Barack Obama signed a federal mandate authorizing Ka ‘Ohana O Kalaupapa to establish the memorial. Since then, Ka ‘Ohana has been working on environmental assessments and other permits, the design of the memorial, compiling the names and a bolstering a fundraising plan. Ka ‘Ohana has already received approvals for the Memorial from the Board of Land and Natural Resources and the State Land Use Commission, among other complete steps in the process.

Now, having passed the final reading in state Legislature last week, the bill to fund the memorial awaits the signature of Gov. David Ige.

‘Ohana members and supporters watched from the legislature gallery, holding photos of their Kalaupapa ancestors and leaders who advocated for the memorial but passed away before seeing its completion. Woodward, whose great grandparents are buried at Kalaupapa, attended the session along with other ‘Ohana supporters including her parents, Aaron and Margaret Wong, and her 10-year-old son, Nainoa. Also among them were Ka ‘Ohana Executive Director Valerie Monson, and longtime ‘Ohana volunteer DeGray Vanderbilt, who worked to help garner support for the bill among lawmakers.

“They have been working diligently for nearly 20 years to see this memorial come to life,” Molokai’s Sen. Lynn DeCoite, who introduced the bill, said of Ka ‘Ohana during last week’s Senate session. “I think all of us at the Legislature know how hard they have worked to get this bill passed.”

Monson said it’s the vision of those who have already died that has carried the project forward.

“We know that many of these advocates for the memorial who have died in recent years are still with us, we feel them every day,” she said. “It’s because of them that we are at this historic point, taking this great step toward forever remembering their names.”

The Kalaupapa Memorial will be located across the road from St. Philomena Church, also known as Damien’s Church, in Kalawao, the original settlement on the peninsula. The memorial’s design features interlocking circles. The top circle represents those who were sent to Kalaupapa, with their names to be engraved on a curved wall around it, and the lower circle represents their families who were left behind. Where the circles meet depicts bringing together the people of Kalaupapa with their families and descendants – one of Ka ‘Ohana’s missions.

“The memorial will serve as a lasting symbol of justice and a place of pride and healing for current and future generations who will be able to touch the names of their ancestors,” explained a Ka ‘Ohana press release.

The design’s concept was the idea of Hitoshi Hida, a retired architect with G70 International, with the overall design developed by the Memorial Design Team of family members, cultural specialists and professionals organized by Ka ‘Ohana O Kalaupapa. G70 continues to work with the nonprofit to bring the memorial to life, along with Goodfellow Brothers and other professionals, according to Ka ‘Ohana.

“I’m so glad that we are finally recognizing some of that wonderful history and the people that gave their lives on that island to make sure that it could continue to live and thrive and be a vibrant part of our community,” said Sen. Rosalyn Baker in her comments supporting the bill’s passage.

Once signed into law, the funding allocated by the bill represents a huge step forward for the memorial project.

Ka ‘Ohana is already working to fundraise an additional $5 million which is needed for an endowment to ensure that the memorial is cared for and maintained into perpetuity.