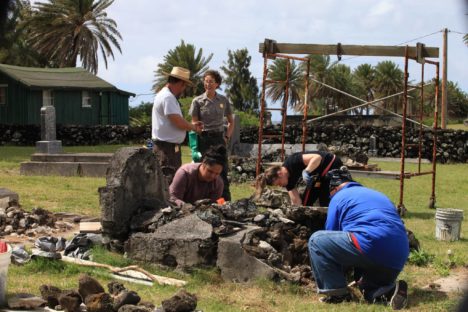 Carrie Mardorf, the cultural resource program manager at the Kalaupapa National Historic Park (KNHP), is leaving the settlement for a job on the mainland. She will be working as superintendent of Cane River Creole National Historical Park in Louisiana. While at KNHP, she  oversaw the preservation of over 300 historic buildings, 1200 grave markers, two cultural landscapes, hundreds of archeological sites, museum collections, and an ongoing collection of oral histories from the Hansen’s disease patient community.

Mardorf said she has been with the National Park Service since 2009 and came to Kalaupapa in January 2014. She first as a one-year detail as Chief of Cultural Resources and then same position in a permanent capacity.

Acting KNHP Superintendent Paul Hosten said Mardorf has been a major influence during the two years she spent in Kalaupapa.

“She has been tremendous at improving how the Division for Cultural Resource Management handles collections, maintains cultural resources in the field, and even vegetation managed associated with cultural sites,” said Hosten.

“She’s been great for the cultural resources program in Kalaupapa,” she said. “Seeing her go will be bittersweet- but I’m really happy for her and we’ll miss her contributions for sure.”

“What I appreciated most about her leadership style, was that she was assertive and got things done, and she was open to understanding and embracing Hawaiian culture into this western structure of resource management,” said Pescaia. “She supported many Hawaiian initiatives here in the park, and I am glad she set a strong foundation for these initiatives to continue.”

Mardorf said she enjoyed her time at KNHP and already misses it.

“The best part about working at Kalaupapa was living in the small community and getting to know the patients and kokua, and being able to preserve some amazing historic resources. Other parks don’t have the breadth and depth or complexity of cultural and natural resources that Kalaupapa has,” said Mardorf. “It’ll always have a special place in my heart.”