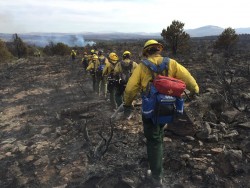 Molokai’s Ricky Chong, Daniel Romes and Joe Mollena recently returned from a stint fighting wildfires in northern California. Employees at Kalaupapa National Historical Park, they joined National Park Service staff from other Hawaii parks to make up an all-Hawaii wildfire-fighting crew. The crew joined staff from other agencies and was deployed to the over 10,000 acre “Dodge Fire” north of Susanville, CA and the over 36,000 acre (and counting) Forks Complex fires near Hayfork, CA.

Terrain is steep, rocky, and rugged. The work is hot, smoky, exhausting and dangerous.

“Those fire shelters really aren’t going to help you much,” explained Chong. “You know Christmas trees? These trees are like that but three or four stories high and they go up like a torch.”

He said the dangerous conditions make for strict safety rules. “You can’t ever be separated from your fire pack, not even when you go to the bathroom. And you can’t take off your hard hat. They are very strict! One of the crew guys forgot his gloves and they would not let him on to the helicopter.”