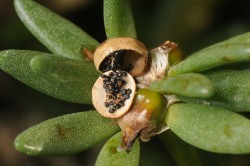 Only one small population of ‘ihi (Portulaca villosa) exists along the crater rim – more plants are currently being introduced to the area in the hopes of increasing the number of populations and individuals to make the plant more resilient to climate change. Photo by Paul Hosten.

Although scientists cannot predict with absolute certainty the universal severity of climate change nor its impacts, the effects are threatening the country’s National Parks with significant risks and challenges. A recent study by the National Park Service (NPS) shows that any of the 289 National Parks, including Kalaupapa National Historic Park (KNHP) show that temperatures over the last 30 years are warmer now than they were in 1901..

At KNHP, scientists, researchers and organizations are working together to take develop and implement programs to address climate change.

“The Park has the resources to really think about climate change and to act on it,” said KNPS Chief of Natural Resource Management Paul Hosten. “We have to because climate change is a threat.”

The national NPS study analyzed climate variables such as temperature, precipitation and rising sea levels and found changes in each.

“This report shows that climate change continues to be the most far-reaching and consequential challenge ever faced by our national parks,” said NPS Director Jonathan B. Jarvis. “Our national parks can serve as places where we can monitor and document ecosystem change without many of the stressors that are found on other public lands.”

“When we try and assess the effects of climate change we look at data that’s been collected over a far longer period of time,” Hosten said. “Some of the changes we picked up on are warmer air temperatures, which leads to rising global temperatures. There are a number of concerns here.”

In Kalaupapa, the annual rainfall has declined on the peninsula over the past 20 years, Hosten said. Molokai residents are supplied with water from higher elevation sources, such as  mountain streams. This decrease in rainfall may lead to the increase demand for water extraction from other areas, which may strain water supplies in the settlement, he explained The lack of rainfall will also cause an increase in extremely dry landscapes, which creates an increased fire hazard.

With the increasing temperature of the Earth comes the rising of sea levels of the ocean. The projected sea level is expected to rise one to four feet in the next century, Hosten said. This will threaten the habitats of endangered species, historic structures, native plant species, animals and have a huge impact on KNHP, he said.

The data NPS has collected reveals that ocean temperatures have increase .9 degrees Fahrenheit since 1956 and are projected to warm significant over the coming decade. Additionally, ocean acidity has increase by 26 percent since 1880 and is expecting to increase 37 to 50 percent by the year 2100, Hosten said. This will stress out marine life and affect habitats on land and in the ocean.

Kalaupapa and its many partnering organizations are seeking solutions relevant to Molokai to fight climate change and its many drastic effects.

To combat the rising ocean levels, Eric Brown, the KNHP marine ecologist is monitoring the changes in water temperatures and ocean acidity and the effects of coral, algae and fish colonies.

In 2010, Kalaupapa’s Solid Waste Management Program developed an alternative waste method to recycle materials, begin composting materials and reduce, reuse and recycle waste. Last year, the program recycled 195,358 pounds of waste for a diversion rate, or how much waste is diverted from the landfill with recycling or composting, of 86 percent, said Arthur Ainoa,  leader of the KNHP recycling program.

The park intends to divert 90 percent of waste by 2015, which can be achieved by diverting more construction and demolition (C&D) waste, Ainoa said. Currently, the program is diverting 50 percent of Kalaupapa’s C&D waste and would like to get that waste stream to 100 percent. 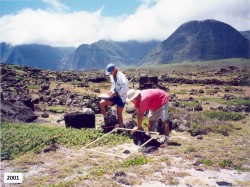 In 2001 the vegetation near the “Mormon steps” eat of Hoolehua beach on the Kalaupapa Penninsula showed a lot of non-native grasses. Photo by Patti Welton.

The program is always searching for additional types of waste to recycle, such as refrigerant from air conditioners, freezers and refrigerators to be removed, reclaimed and reused, Ainoa said. Next, the program will recycle #5 plastics, found in butter or yogurt-type containers. The refrigerant recycling will begin this year, and recycling #5 plastics is expected for the near future.

“The topside residents have options to use the landfill, but I do notice an increase in recycling,” Ainoa said. “I believe there needs to be more educational awareness of recycling, and composting of food waste and the emphasis should be with our youth, starting at the elementary schools, to make them the future stewards of the environment on Molokai.”

In nearby areas of Molokai, similar efforts are happening.

Molokai Land Trust (MLT) is working to preserve the natural and cultural resources of Molokai by restoring ecosystems and cultural sites. MLT is undertaking a dune restoration project adjacent to Ilio Point on the Mokio Preserve. The site sits about 70 feet above sea level, making it less susceptible to damaging effects from rising sea level, according to Butch Haase, MLT executive director. The project aims to preserve and restore critical habitat for native coastal ecosystem, endangered species recovery and ground nesting seabird habitat, he said.

“Molokai has some of the best remaining dune systems left in the Hawaiian Islands so it’s really imperative to protect them,” Haase said. “The coastal areas are prone to the damages of sea level rising. The project will act as a refuge of our coastal eco-system, so that’s why it’s really important.”

The Land Trust works with volunteers, AmeriCorps interns and Molokai Middle School. MLT has hosted every single seventh grader at the school in the last two years, Haase said. Everyone involved works on costal restoration of plant species partnered with The Nature Conservancy and KNPS.

The residents of Kalaupapa and topside Molokai volunteers are making lifestyle changes that are having positive impacts on the settlement and fostering environmental responsibility. 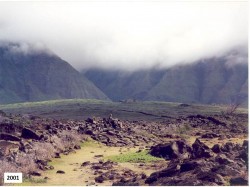 Native vegetation have increased since cattle and deer were removed from this fenced area. Ilima, akia, naupaka and others now dominate the area, compared to the image above. Photo by Paul Hosten.

According to Hosten, KNPS recently implemented a bicycling program for community members to reduce car use across the peninsula and improve the health of employees and patient residents. The bikes were purchased with funding from the NPS.

Additionally, topside volunteers have collected plastic and waste from the beaches, removing over 8,000 pounds of debris since 2011, Hosten said.

“Kalaupapa is regarded as one of the most preserved archeological complexes in Hawaii, so protecting it is vital,” Hosten said. “We’re concerned how these aspects will affect our historic archeological resource and historic buildings, so in the future we will see more planning around climate change.”