The remote Kalaupapa settlement is normally the epitome of peace. But once a year, its wharf becomes as busy as a New York City intersection. It’s barge day — a big occasion for the tiny community that’s taken place annually for decades. It’s when a year’s worth of equipment, gasoline, non-perishable food supplies and personal orders is delivered to the settlement. It’s been described as Christmas in July.

There’s only barge in the state small enough to fit into Kalaupapa’s narrow harbor — and only a short window of time in the summer when the rough water is calm enough for the barge to safely dock.

The barge approached the peninsula at dawn last Saturday morning. It took more than an hour of pushing, pulling, tiptoeing around reef and rocks, angling the long barge just right to fit into the wharf. Kalaupapa Department of Health (DOH) Administrator Mark Miller describes the process as “an art, not a science.” 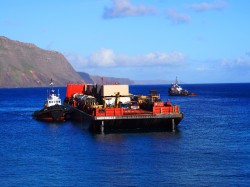 “It’s a three-dimensional game,” said National Park Service (NPS) employee Paul Hosten of the challenges of docking the barge with the wind, currents and two tug boats working to maneuver it in place. “This is when you hope everything your ordered came in.”

The moment the barge is securely tied, the wharf becomes a flurry of activity. The quiet settlement suddenly turns into a thoroughfare of trucks and fork lifts. As if acting out an elaborately choreographed dance, workers unload thousands of tons of freight, while simultaneously piling the barge high with ancient, rusted cars, broken appliances and empty containers to haul away from the settlement. Young Brothers barge staff flew in to assist in ground operations, weaving equipment in and out with flawless synchronization.

NPS employee James Espaniola describes it as “the show of the year.”

Historically, barge day has always been a festive occasion. Workers and patient residents alike come out to see what others have ordered.

But a lot has changed since the old days. NPS employee Lane Kainoa has seen 20 years of barges come in. He said the settlement used to be serviced by two barges per summer. And even after it was reduced to just one, the freight used to be piled twice as high as it was on this year’s barge.

“It’s not quite the celebration it used to be,” said Miller.

With more patients passing every year and limited state and federal funding, he said the excitement of the load’s arrival is somewhat dampened. Patients used to gather joyously to see the barge’s arrival, but he said many patients chose not to come out to watch this year.

“This is the smallest barge load yet and it’s just going to get smaller [every year],” he said. “Since patients have passed away, we just kind of hold onto what we got.”

But for patient resident Meli Watanuki, who has retired but still works in the community’s general store, the day still brought a smile.

Watanuki said she and store staff begin planning and ordering in June for the following year’s barge. Her personal orders included bags of food for her two dogs and a new freezer. 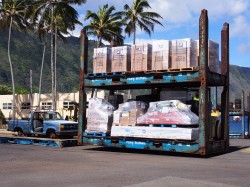 New appliances, food and building materials (right) were unloaded from the barge, while old cars were shipped out. Photo by Catherine Cluett

Fellow patient resident Gloria Marks, owner of Damien Tours, received two busses on this year’s barge. In 2009, she bought four diesel busses for her tour business. Now, she said she rotates three in operation, sometimes using two at a time on busy days with 60 visitors or more. The two new busses – one 26 passenger and the other 30 passenger – will also be used for Damien Tours, as well as transportation of medical student groups that visit the settlement, she said.

“I’m not even sure if [the new busses] use gas or diesel,” she laughed. “I just ordered them!”

She said her husband and founder of Damien Tours, the late Richard Marks, told her not to buy any more busses. But that didn’t stop her from making sure two more arrived this year, she chucked.

Marks also orders cases of beer on the barge for her other business, Fuestaina’s Bar.

For the Department of Health, the big purchase of the year was a $100,00 telehandler — which is like a fork lift combined with a crane — which staff has been trying to get for the past four years, according to Miller. The machine will be used to lift roofing supplies, work on Oceanic Cable connections on telephone poles and perform other tasks, Miller said. He added that the purchase of new cars was put on hold in order to obtain the state-funded telehandler.

Gasoline is another commodity that arrives annually on the barge. Miller estimates this year’s gasoline delivery to be about 23,000 gallons. Last year’s was 26,000. He said he expects the settlement’s gas ration will stay at 7 gallons per person per week.

Saturday’s delivery — combined with weekly shipments of perishable items by airplane — will last residents until the barge makes its annual visit again next summer.