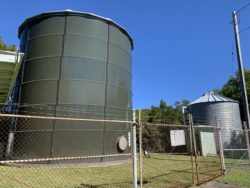 Residents of Kalae were advised to boil their water during a 24-hour period last week after possible E. coli contamination was discovered. On Jan. 13, the county Dept. of Water Supply announced samples had been collected to determine the source of the bacteria. The following day, the DWS gave the all clear that samples had come back clear of any trace of E. coli contamination, canceling the boil water advisory.

Kalae’s water source is Dept. of Hawaiian Home Lands wells pumped into their storage tank, the DWS said in the Jan. 13 advisory. Fecal coliforms and E. coli are bacteria whose presence indicates that the water may be contaminated with human or animal waste. Microbes in this waste can cause diarrhea, cramps, nausea, headaches and other symptoms. Infants, young children and those with compromised immune systems may be especially at risk. Bacterial contamination can come from run-off entering a drinking water source, such as during heavy rain or from a break in the distribution system, such as a waterline, or a failure in the water treatment process. The DWS did not specify what caused the contamination in this case, and did not return requests for additional information.

During the advisory, residents were told to boil water before consumption for at least one minute and let it cool before drinking, or use bottled water. Boiling water kills the bacteria present in the water during contamination. Boiled or bottled water was advised for drinking, making ice, brushing teeth, washing dishes and food preparation.

DWS Molokai employees placed a 500 gallon tank of potable water in Kalae for residents in need the evening of Jan. 13.

On Jan. 14, the DWS announced, “New tests of water samples confirmed that the water meets U.S. Environmental Protection Agency and Hawaii Department of Health water quality standards and does not contain any trace of E. coli contamination.”

“The department extends its appreciation to customers for their cooperation and understanding,” the Jan. 14 release continued.