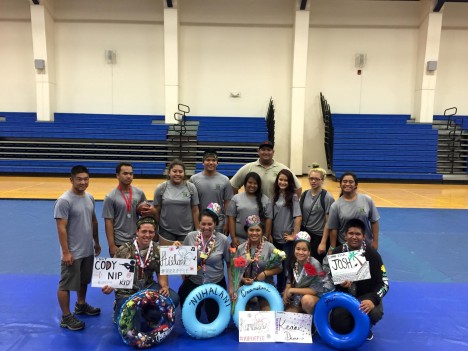 The boys’ and girls’ teams celebrated their seniors at the MILs. Photo by Lee DeRouin.

At last Saturday’s Maui Interscholastic League air riflery championships, the senior shooter finished in a season-high third place with 500 points in the girls’ individual competition. Teammate Jershon Kaalekahi placed second with 504 points for the boys, as reported by The Maui News.

Cody Nip joined Kaalekahi on the medal podium in third place. Nip posted 501 points and the second highest prone total at 188. Josh Cabreros’ 477 points tied him for ninth place, while Edwin Greenleaf came in 46th with 353 points to put the team in fourth overall.