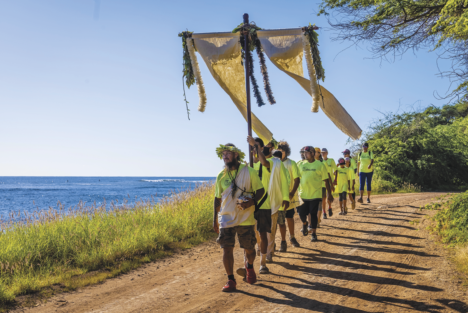 Lonoikamakahiki! Lonoikamakahiki! The chant rang out through every ahupua’a on Molokai last week as a Ka’ahele crew walked more than 50 miles from Halawa to Hale O Lono carrying Lonomakua in the 40th annual Ka Molokai Makahiki. Bearing the lei-draped white banner fluttering in the wind, the group of marchers stopped at every school and community on the island, accepting more than 100 ho’okupu over the course of the week-long journey.

“The Ka’ahele was traditionally a time for the island to assess the status of the ‘aina and kai,” said Miki’ala Pescaia, cultural practitioner and one of the event’s organizers. “The hoʻokupu were presentations of the best products of the bounty of the island, so that everyone could celebrate the momona and focus on making more of it. Walking across Molokai this year, the Ka’ahele brought a message of aloha, of connection, of concern and care for one another.”

Because of COVID the last two years, the island-wide journey has taken the place of the Makahiki celebrations involving island-wide athletic competition Molokai has become known for. Up until 1919, traditional festivities had taken place annually.  Then in 1982, the Molokai community revived the celebration, and it has been going strong ever since. Youth from every school on the island competed in games of strength, endurance, speed and wit, and the community had opened up keiki and adult competitions for those from around the state to join in the ultimate test of champions.

This year and last year, however, competitions were put on hold in favor of COVID safety. This year, Pescaia said donations of COVID tests allowed each Ka’ahele crew participant to be tested everyday, giving peace of mind that they were carrying only aloha as they traveled the island.

Last Monday, Lono started in Halawa and traveled the winding, narrow road to Honoulimalo’o. The following day, the crew walked to Ka’amola. Wednesday’s march traveled from Ka’amola to Kalama’ula and Thursday, Lono made it to Pala’au (Mahana). The final leg last Friday concluded in Kaluakoi at Hale O Lono.

Lono bearers shouldered the 40-pound banner across the island, up mountains, by the ocean-side, and through the heat.

“Our youngest Ka’ahele member, 12 year old LonoaNahulu Lima-Maioho, was the only person to walk the entire 54 mile route crossing 51 ‘ahupua’a boundaries with an oli kahea to each one, and blowing his pu over 1,000 times along the way,” said Pescaia. “He is definitely the ‘Ano Koa Ki’eki’e champion this year.”

The oldest Lono bearer was Walter Ritte, and the youngest was Kahikikalaikalolo Helm, along with 18 other kane in between.

“Those who participated expressed pride in their ohana, community and island, and they inspired the same feelings in others,” continued Pescaia. “In a time when there is so much hardship, uncertainty, fear and worry, we needed a break, to take time to celebrate what we are doing right, what works, what abundance and blessings we enjoy. We honored those who have fought for years to protect our water, when other islands are facing permanent damage to their aquifers. We honored our resiliency.” 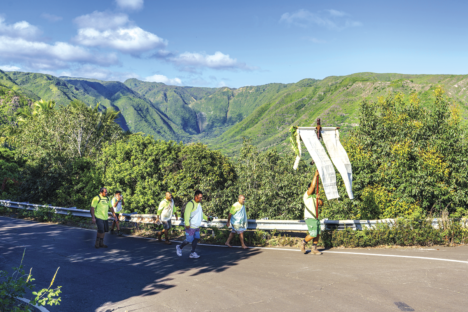 Along the journey, the Ka’ahele crew received ho’okupu given to Lono by ‘ohana, schools and groups along the way. Ho’okupu are carefully selected offerings that often reflect one’s ‘aina, ‘ohana or pule, as embodiments of prayers for abundance, health, peace and other pule, representing the best one has to offer.

“By looking at the ho’okupu offered, we have a snapshot of what our people are eating, what healthy foods they have access to,” explained Pescaia. “We can see how the drought, deer and disease may have affected our fruits and vegetables across the island. We can see other things, like trust, generosity, hospitality, respect and aloha. It’s amazing how much aloha we have on Molokai for one another. Kalo, kukui, mai’a, ‘uala vines and pa’akai were the most abundant offerings this year.”

Each year, Makahiki season represents about four months in the wintertime. As the Makali’i star cluster, also known as the Pleiades, rises at sunset in November, Makahiki begins. Traditionally it was a time of gratitude, peace, celebration and prayer. During Makahiki, “fishermen and farmers would repair their tools and canoes, bring in harvests, prepare for the next fishing and farming season, conduct other activities that included repairing relationships with people, gods, lands, and ocean,” explains kamolokaimakahiki.com. “It was a time to reset and bring things in to balance. During the reign of the aliʻi, some taxes were collected, where the people chose their very best examples of their labors, and expressed their appreciation to everyone and everything that contributed to the bounty. That included Lono.”

For many on Molokai, Makahiki is more than just a few days of friendly competition or the mention of Lono.

“Our ʻohana looks forward to Makahiki every year! From mid November to about early February we are in full celebration mode!” said educator Maile Naehu, whose husband and son were both lono bearers this year. “We honor it as a time of healing, bounty, and acknowledge the frequent embodiments of Lono that appear; the clouds, wind, abundance of growth and peace.  During this season we find different ways to express mahalo whether it’s planting on the poepoe or full moon phases, partaking in hiʻuwai, ceremony, visiting schools to do storytelling, and playing makahiki games.  We are so grateful for the amazing organizers of the Kaʻahele a Lono for not only giving us another way to celebrate as an island community during this time of COVID, but they also brought back a tradition that hasnʻt been practiced for a very long time. Lonoikamakahiki!”

Not only does Makahiki offer a time for reflection, the Ka’ahele tradition itself brought new perspectives.

“When you walk your ‘aina on foot, you get to see a lot that you miss when you drive,” reflected Pescaia. “I hope next year, we see agencies who manage lands, our politicians, our leaders come out and walk too. The conversations we have as we observe and discuss the status of our island are amazing. They are informative and offer multiple perspectives. If the fishpond person is walking and talking with the forestry person and the rancher and the farmer and the health care person and the politician — can you imagine how much more informed we would be in our roles, to see our island through everyone’s lenses in real time together? Perhaps it would elevate the community conversations.”