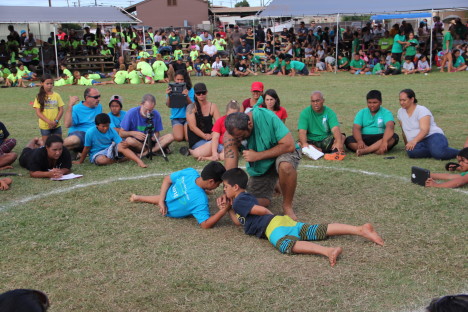 Each year, youth and adults from all over Hawaii gather to celebrate Ka Molokai Makahiki in a place where cultural traditions remain strong and friendly athletic competition is celebrated. During Makahiki, the ancient Hawaiian four-month season of peace, war was kapu, or forbidden, and every district gathered to appreciate the harvest and challenge each other’s athletic prowess.The historic tradition has been revived for more than 30 years on Molokai.

Cultural events began Thursday, with an evening lecture about Kaho`olawe, where the Makahiki season begins each year. Adult games kicked off Friday night, and student competitions followed on Saturday, with a ho`olaulea afterward.

During the opening ceremony Saturday, a kupuna led each district with a ho`okupu to Lono, god of agriculture and fertility. As ho`okupu, each region of the island offered something for which it was historically known. 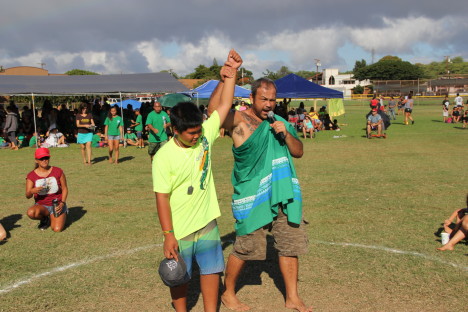 Students train at school for months and are selected from their classes to represent at the games. They each hope to win for their district in feats of athleticism such as hukihuki (tug of war), haka noa (chicken fight while jumping on one leg), ulu maika (similar to bowling), `o`oihe (spear throwing), kukini (running races) and uma (arm wrestling). Pictured above, students grapple in uma, and Hokuao Arce is named the fifth grade uma champion.

One Response to “Ka Molokai Makahiki 2016”