For the past 22 years, Ka Hula Piko has brought the Molokai community and ohana together, along with visitors from around the world, to celebrate Hawaii’s cultural traditions and identity through hula.

“It’s a gathering of ohana — that’s what it’s all about,” said Molokai kupuna Julia Hoe. “[Hula] is who you are and where you come from. You’re dancing your genealogy.”

Halau and Hawaiian music groups from around the state and as far as Japan shared their talents and traditions with hundreds of attendees at Saturday’s ho`olaulea event, held for the first time this year at Lanikeha in Ho`olehua.

“Remember, hula was here before Zumba,” Hoe laughed. “You don’t even have to be a hula dancer and the music goes through your body — you don’t even realize you’re swaying.” 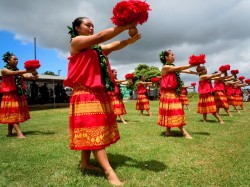 The annual festival was founded by the late Kumu Hula John Kaimikaua, whose ohana is from Molokai. Today, the tradition is carried by members of his halau, Halau Hula o Kukunaokala, whose mission is to carry on education of the ancient traditions, mo`olelo, hula and oli of Molokai.

Many believe that Molokai is the birthplace of hula. As legend has it, hula was born on a sacred hill in Ka`ana, and the art was later shared among other islands by the goddess Laka. Ka Hula Piko today carries on that art and the traditions that accompany it.

“All of this is the result of the desire of one man to… perpetuate the culture,” said Zhantell Dudoit of Moana’s Hula Halau. Aunty Moana Dudoit, the halau’s kumu who recently passed away, was especially honored at this year’s event.

The three-day event included cultural excursions and lectures on Thursday and Friday, culminating in the ho`olaulea on Saturday. For the first time, this year’s schedule also featured a panel of Kumu Hula from around Hawaii, including Molokai’s Aunty Kauwila Reyes, sharing their traditions.

Napua Greig Makua, a kumu hula from Maui, expressed hope for the future of hula, adding that evolution within the art is positive, as long as it remains recognizable and the intent remains intact. 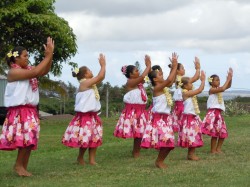 “I look at the young dancers, and when I was their age I wasn’t even close to dancing what they are,” Greig Makua said of today’s progressing techniques.

This year’s theme for the event was “Na Kupua `E`e,” celebrating the kupua, or peculiar shape shifters of ancient Hawaii, who were able to change forms into animals or natural elements. Some kupua were good, acting as protectors of the land and people, while others brought harm and destruction around them. The event featured the second annual Creative Keiki Contest, in which local youth artistically interpreted this year’s theme, visually answering the question, “If you were a kupua, what form would you change into and why?”

Julie Bicoy of the Molokai Visitor’s Association said that while she has noticed a decline in visitors coming for the event due to the economy and limited flight availability, it still offers a boost for local businesses.

One of the Ka Hula Piko’s organizers, Dion Dizon, agreed.

“After 22 years, it has become an anchor event that people plan their vacations around,” she said, noting that Ka Hula Piko brings in repeat visitors from Canada, Japan, Europe and other parts of the world. 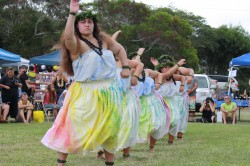 Aside from the economic benefits for the community and vendors at the event, Ka Hula Piko’s mission is to both remember the cultural aspect of hula’s beginnings on Molokai and bring families together to learn. 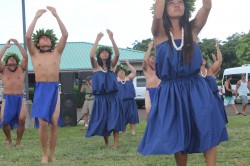 “If you leave knowing more, feeling a connection and appreciation for the culture, we’ve done our job,” said Dizon.