Thursday, May 5th, 2022 By The Molokai Dispatch Staff 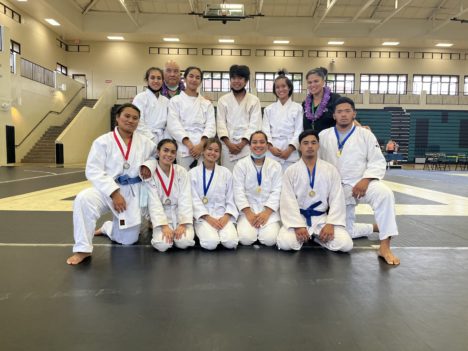 Four Molokai judoka won titles at the Maui Interscholastic League Championships last weekend, while two more earned second places and all six will be advancing to states this Saturday.

The State Judo Championships will be held on May 7 at the Stan Sheriff Center in Honolulu.

The Track team competed in its last regular season meet last weekend and are headed to the MIL championships this weekend.

“Last race before MILs, the boys did what they needed to do and made their marks in this meet,” said Head Coach Kabbie Bicoy-Juario. “It was a long month of training before we traveled. The boys worked very hard battling the winds and rain at practice and proved that it’s not going to hold them back in this meet. They ran with their gut and throwers threw with all their might and showed amazing results. So now we prepare for MILs and put everything together.”