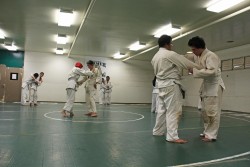 For a sport whose name means “the gentle way,” the energetic shouts accompanied by the sounds of bodies slamming on the mat may seem anything but. However, when executed correctly, the sport of judo is a fiercely fluid set of moves that are far less painful than they appear.

“The object of judo is to throw the person on their back perfectly,” said Molokai Coach Eli “Lihau” Maioho. “When that’s done, it doesn’t hurt at all.”

Molokai athletes are being schooled in the art of throwing hard and falling soft in the high school’s first-ever judo season. In only a few meets, athletes have gone from newcomers to top seeds in their weight classes. Seven students are headed to the state tournament this weekend. But for the Farmers and their coaches, pursuing the ancient Japanese art is more than just an athletic endeavor.

“The biggest goal was to really instill that discipline in the judoka, the students,” said Coach Kalei Kawa`a. “Just instill that reverence. … It’s not like other sports where you’re [just] chasing after championships. It’s a practice and a way of life.”

Last year, former athletic director Hoku Haliniak, who knew Maioho had judo experience, found room to write the sport into the budget. Students had previously showed interest, and one had even based his senior project on jumpstarting the judo program. 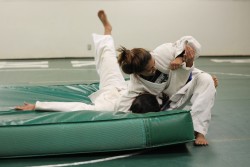 “It never started [at the time], but it definitely got the ball rolling,” said Maioho.

Maioho and his cousin Kawa`a signed on as coaches this season. The former competitors attended Kamehameha-Kapalama together and both won state championships in 2005.

Kawa`a said they first focused on teaching their athletes respect for the Japanese art. The judoka bow to coaches, teammates and each other, and they’ve had to pick up Japanese lingo, as judo is refereed completely in Japanese. They’ve also encountered the distinct yell called a kiai that judoka emit during a throw.

“Kiai is basically exerting that energy and focusing it out in a sound,” said Kawa`a. “The idea is that the hardest point in time is the throw, so they’re gonna exert their energy and make a sound so they can complete the throw. Some are more comfortable with it than others.”

While the judoka were initially startled by the ferocity and loudness of kiai at Maui competitions, they learned to embrace it.

“When we kiai, none of us do it as a like a joke because we know it’s cultural and we have to respect it,” said freshman captain Kamahina Kaiama-Kanuha.

When it comes to competing on the mat, the most important aspect is learning to fall correctly, said Kawa`a. A falling athlete will spread out an arm to absorb the impact over a greater surface area. Unlike other martial arts, said Maioho, there is no striking in judo. Major points come from throwing, when judoka grab an opponent’s gi, or uniform, balance them on their backs and flip them overhead onto the mat.

“It’s all in the hips,” said freshman Hauoli Caparida. “You just pop your hips and get lower than their hips.”

The technique allows the 132-pound Caparida and other smaller judoka to lift teammates 50 pounds heavier and throw them to the mat with power.

The coaches were impressed early on with their rookie crop of judoka. There are currently eight girls and five boys on the team. Six are freshmen, and three of those freshmen are bound for states.

“Their learning curve was way faster than mine,” said Kawaa shortly after practices first began in early April. “They’re just so hungry for the new techniques.”

Freshman captain Ikua DePonte’s dad first introduced Ikua to the sport when he was five. When he was bullied in elementary school, he said judo gave him the discipline to not retaliate. 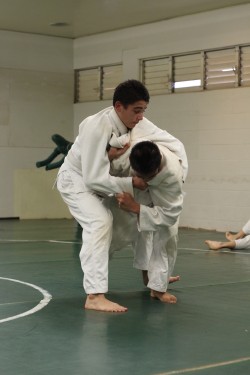 “When people talk mean kind stuff about me, I just block it because I know I have something better to do than to listen to their stuff,” said DePonte, who is the only Farmer with a background in judo. “… I wanted to do something … but I just thought about it and I told myself that I’m better than that.”

It’s the kind of mental strength the coaches are trying to teach the kids. Caparida recently went to a meet and lost twice to the same opponent. When a Molokai High School teacher who was used to seeing athletes angry over losses saw Caparida comment on the matches with a smile, she was so impressed that she emailed the coaches, saying that “the silent, humble pride that [the athletes] have in their work is so evident.”

While every sport emphasizes discipline, judo is particularly strict.

“Any poor sportsmanship, in any form, whether slapping the mat or a sour face, it’s very much looked upon as a zero tolerance thing in judo,” said Kawa`a, who explained that competitors can be disqualified for reactions that may go unpunished in other sports.

While judo differs from wrestling, Molokai’s wrestlers are leading the way in judo competition. At the team’s first meet, DePonte and junior wrestler Kuikamoku Han finished first in their weight classes. Multiple wrestlers have had top two finishes throughout the season, and last week at the MIL tournament, DePonte, Han and senior wrestler Kaila`oe Cabanting went in as top seeds and came out champions. They and four other judoka qualified for the state tournament on May 9.

While the season is nearly over, the judo program has sown solid roots.

“For Molokai to have their first judo team has been a big help,” said Cabanting. “… Judo helps us with other sports. It teaches us self-discipline and teamwork, and [the program] gives Molokai a good name.”