Judo Debuts on the Mat 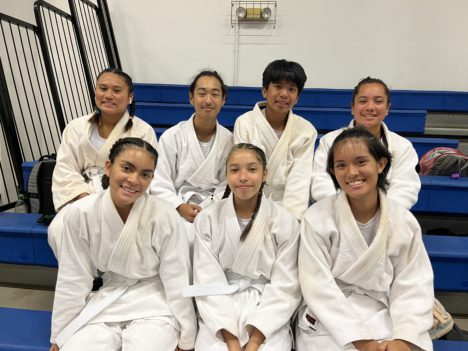 In its first tournament of the season and the first for its judoka, the judo team competed last weekend at Kamehameha Maui High, taking home four first places, a second place and a third place finish.

“It was a great opening tournament for our new judoka,” said Head Coach Kalei Roberts. “They witnessed and experienced their first live judo matches. It took a little time to get in the groove of things, but once they finished their first matches, they understood the protocol and could focus more on their game plans. We have a lot of areas to improve on and look forward to the next tournament.”

Top three finishes were Randyn Cabreros at third in the boys 132B division, and on the girls’ side, Anjolie Manaba won first at 98 pounds, Kiliohu Duvauchelle took second at 115, Olapa Duvauchelle earned first at 122, Sonni Han took first at 172, and Ara Puaa won first at 220 pounds. Tyren Takenaka also competed.

The judo team will travel to Maui again this week to finish the regular season, then the MIL tournament will be held on Saturday, April 30, with states to follow on May 7.