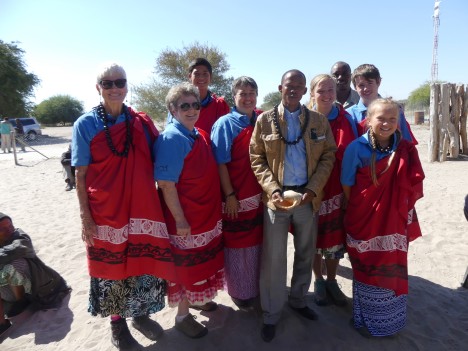 Editor’s note: A group of Aka`ula students had the opportunity to travel to Africa over the summer with teachers. Here are some of their stories, reprinted with permission from the school’s newsletter.

The amazing journey in Botswana with four classmates and three teachers ended too quickly. It was a trip I will never forget. The first animal I saw was a rhino and I was thinking, “This is so much different than on TV.” I have missed so many once in a lifetime opportunities that I wish I had taken. I did not want to miss this one. The experience has taught me about where we come from and it has improved my maturity. I loved meeting the new people, seeing the animals and the culture was very interesting. I learned so much. Where I could write pages about the animals I saw, the most important thing is that it has changed me.

The Rhino
By Isla James, Freshman

Surprisingly, the first large African animal I saw in the wild was the white rhino. We weren’t in an area where we would expect to see boulders, so I whispe 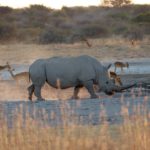 r-shouted what first came to my mind, “There! Rhino!” The vehicle jerked to a stop and quickly reversed to view the huge creature through the bushes. He lumbered over the sand track in front of us only breaking the silences with the rhythmic stomping. There are just 30 white rhinos and four black rhinos in the Khama Rhino Sanctuary in Botswana and the last time one had been seen was two days earlier. This rhino was making his way to the water hole to get a drink. What an experience, and this was just our first day in the bush.

Since traveling to Botswana, I’ve come to like a certain animal. That animal is the elephant. I used to think that other animals like the lion were more interesting than the elephant. I’ve always seen elephants on TV but never thought they were special. Going to Botswana and seeing an elephant for myself changed my view on this beautiful animal. When I saw an elephant for the first time my mind was immediately blown by its elegance and beauty. 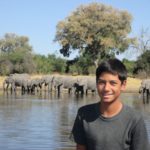 I admire how elephants take care of each other and protect their young. An adorable thing I saw and learned about baby elephants is that they have to get used to their trunks and they throw sand on themselves to bathe. What I also admire is when baby elephants fall down and the mother helps them up. The baby stays in the middle of the parade of elephants until it gets a little older and can walk better. Botswana has the largest elephant population in Africa.

Today, there are an estimated 450,000 to 700,000 African elephants and an estimated 35,000 to 40,000 wild Asian elephants in the world. The elephant is now my favorite animal and I believe that it’s more beautiful than a lion. I am very grateful that I went to Botswana and saw many out of this world animals. It was a great experience to travel with great people. I would like to thank my family for making this incredible trip possible.

On The Hunt
By Hulali Busby, Grade 7

Hulali traveled to Botswana with three of her Aka`ula classmates this summer. She will be attending The Kamehameha Schools, Kapalama Campus this year, but wanted to submit an article about her journey to the school newsletter.

We see them scanning the perimeter for the separated wildebeest. Forming a half circle around it, they try to creep up. One lioness tries to spook the wildebeest towards the hungry pride. Focused yellow eyes are waiting for the perfect moment to pounce. The cornered 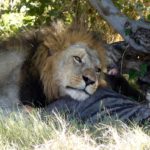 wildebeest starts to detect something and very quickly navigates its way out of death. Dashing after the fleeing wildebeest, the lioness is too late and has lost her prey. This intense lion hunt was a mesmerizing and special experience for me. However, I am glad that I didn’t see an actual kill.