Kaunakakai resident Dane Christopher and his dogs Pua, Chance and Tonka were going on their daily walk on the beach along Kaunakakai pier last week when they found something unusual: a giant, barnacle-crusted light bulb. The end of the fully-intact bulb was marked “500 W.” The rest of the markings were in Japanese.

While finding objects from Japan on Hawaii’s shores is nothing new, Hawaii residents have been reporting an influx of debris that officials believe to be from the tsunami in Japan in March 2011. 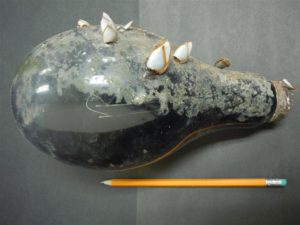 “It’s kind of ironic that a lightbulb could make it from all that devastation,” said Christopher. “It’s the epitome of a message in a bottle — it’s a survivor.”

Christopher is one of several Molokai residents who have recently found debris marked with Japanese characters.

Midge Nakagawa said she, too, walks regularly on the beach. She was taking a stroll on the east end when she discovered a barnacle-covered black plastic skip — similar to the wooden ones often used for shipping — lying on the sand.

“I love finding things on the beach,” she said. “But this was something out of the ordinary.” She dragged the 3-by-3-foot skip to her family property across the road, and it wasn’t until later that she noticed the Japanese writing on it. 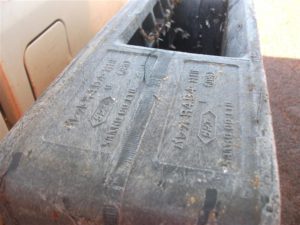 Japanese writing and barnacles can be seen on the side of a black plastic skip found on the east end. Photo courtesy Midge Nakagawa

Nakagawa said she had seen on the news that people were finding Japanese debris lately, but “never thought about [finding anything] on Molokai,” describing her discovery as a thrill.

“I love walking on the beach even more now that I found something,” she said.

Not all the debris has been as well-received, however. A large floating dock last seen off Molokai’s north shore has made national news, first reported by local fishermen. The 30-by-50-foot structure has caused safety concerns for boaters and poses a potential environmental hazard if it washes toward shore, according to officials. The Coast Guard is assisting the state Department of Land and Natural Resources (DLNR) in an effort to re-locate the dock, which, as of Sunday, is still floating at sea. 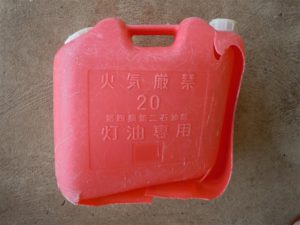 Japanese writing on the side of a plastic gas tank found off Molokai’s east shore. Photo by Catherine Cluett

Local keiki have also made finds.Ten-year-old Keahe and her younger brother Namaka, found a red plastic gas container floating in the water around Ualapue while they were boating with their grandparents last week. The container, broken on one side, is covered with Japanese writing and still smells like gasoline.

The Molokai-found items make up a small portion of the marine debris that has been arriving recently to the shores of the Hawaii, the U.S. mainland and Canada. The first confirmed piece of debris to Hawaii was a 4-by-4-foot blue bin spotted off the coast of Oahu two weeks ago, according to the National Oceanic and Atmospheric Administration (NOAA), as reported by the Associated Press. Japanese officials confirmed that the bin originated in Fukushima.

“DLNR and the Department of Health (with assistance as needed from other state agencies) along with NOAA, the U.S. Coast Guard and U.S .Environmental Protection Agency (EPA) are working together on the Hawaii response to marine debris from the 2011 Japan earthquake and resulting tsunami,” stated a DLNR press release last week.

One to two million tons of debris from the tsunami remain in the ocean, but less than five percent of that could reach American and Canadian shorelines, according to Nikolai Maximenko, a University of Hawaii researcher and ocean currents expert.

While much of the debris originated from areas in Japan exposed to radioactivity from the destroyed nuclear plants during the earthquake and tsunami, experts say contamination in marine debris reaching Hawaii is unlikely. However, the state DOH has been conducting shoreline surveillance for radiation since April 2011, according to the DLNR release.

DLNR is requesting the public to report possible Japanese debris they find by calling 808-587-0400 or emailing dlnr@hawaii.gov. They request that if possible, a picture of the debris be sent, along with a detailed description of the object, date found, location and finder’s contact information. This information will help DLNR staff determine if a more thorough investigation is necessary, according to officials.