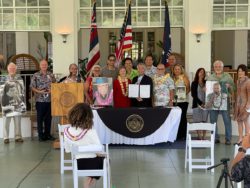 Last Wednesday, Gov. Ige signed into law a bill that designates January as Kalaupapa Month in Hawaii. It will “serve as an annual reminder of the importance of Kalaupapa and the significant sacrifices and contributions of its residents throughout the history of Hawaii,” the bill reads.

Kalaupapa resident John Arruda, who was sent to the peninsula in 1945 and is now 97 years old, stood next to Gov. Ige as he signed the bill. Ige presented Arruda with the pen he used.

“Freedom was taken away from us and it means a lot that the State — the Legislature and the Governor — want to honor our people in this way,” said Arruda. “To me, Kalaupapa Month will be a time to think about all our people who were sent here, all that we went through and who we are.”

In 1946, new medications began to be used in treating Hansen’s disease patients in Hawaii, which meant they did not need to be isolated from others. However, it wasn’t until 1969 that the state’s official isolation policy ended.

“In dedicating January of each year Kalaupapa Month, we hope to inspire the people of Hawaii to remember the estimated 8,000 patients who were sent to Kalaupapa, and … despite the odds against them, came together to build a community of caring, respect and aloha for each other, and for the broader community,” Ige said.

The bill was championed by Ka ‘Ohana O Kalaupapa, an organization of remaining residents, descendants and supporters.

“Ka ‘Ohana hopes that teachers will include Kalaupapa in their classrooms, that church leaders will pay tribute during services and that family members will remember their ancestors in various ways,” said Valerie Monson, former executive director of the organization.

Ka ‘Ohana selected January as Kalaupapa Month because of a number of dates important to the settlement’s history took place during that month. Most significantly, on January 6, 1866, the first 12 people arrived at Kalaupapa because they were diagnosed with leprosy. They were the first of an estimated 8,000 people who were taken from their families and forced into isolation.

“The original inhabitants of Kalaupapa played a critical role in helping these leprosy patients who faced tremendous difficulties,” reads the bill. “If not for their kindness and compassion, life would have been far worse for those who had been banished to the peninsula. The government provided very little support or supplies to the early settlement of isolated leprosy patients, including no doctor or hospital, and expected the patients to be self-sufficient.”

Along with other events that took place in January, it is also the birth month of both St. Damien and St. Marianne.

Charmaine Woodward — whose great-grandparents were both sent to Kalaupapa and married there in 1911 — is on the Ka ‘Ohana Board of Directors.

“Kalaupapa Month gives us a chance to be intentional about honoring the resilience of our people, the strength of our people and reminds us that we, too, can be resilient and powerful as well,” she said.

Along with signing the Kalaupapa Month bill on June 16, Gov. Ige also signed a law recognizing June 19 as Juneteenth, commemorating the end of slavery in the U.S. Juneteenth marks the anniversary date of the June 19, 1865, when the freedom of African American slaves was proclaimed and enforced by law in Texas, the last state with institutionalized slavery. Juneteenth is now a federal holiday, as of June 17, when President Joe Biden signed the Juneteenth National Independence Day Act into law.

“I’m pleased to be here today to sign bills that recognize members in our community who have endured struggles, both past and present, about unequal treatment here in the islands and across the country,” Ige said.