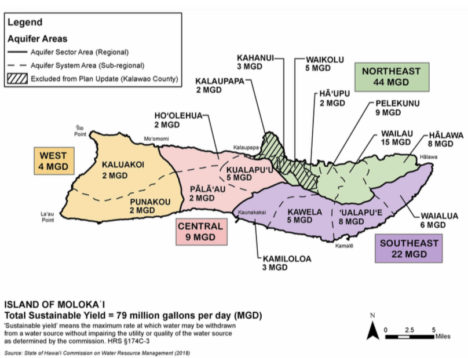 Map courtesy of County of Maui.

On an island, water is life. “Ola i ka wai.” So what does the future of this life look like?

The “preliminary” aspect of the draft means that Molokai community members have a chance to comment on it before a “much more detailed” draft which takes into account these comments will be made available.

The Molokai Water Plan, formally known as the Water Use and Development Plan, is part of a statewide requirement that each county adequately prepare for future water demands and production. The goal of Molokai’s plan is to provide a balance between the preservation and management of the island’s water resources to best serve present users and future generations, according to county planners.

Some important numbers to consider:

79,000,000 – the number of gallons per day of water that Molokai can sustainably yield.

This projection is based on a mid-growth scenario model of 0.5 percent per year, which was “determined to be the most likely scenario for future (year 2040) water demand,” according to the county.

While sources needed to meet this increase in demand have yet to be finalized, the preliminary draft laid out a framework of values and Molokai specific issues that the county wishes to consider when identifying sources.

In terms of water usage, the county plan seeks to enshrine “values, goals and principles” illustrated by the Molokai community. These include creating healthy forested watersheds, maintaining streams and ground aquifers, conserving water, implementing technology to reduce water waste, and using the Molokai community as the experts in guidance.

Likewise, the plan addresses Molokai specific issues. These range from the need to maintain subsistence lifestyles to returning to an ahupua’a management system to regulating Molokai Ranch and updating Molokai’s water delivery systems.

And while this County effort intends to conserve Molokai’s unique existence and traditions, community members are still concerned.

Molokai Planning Commissioner Lori Buchanan pointed out that “the issue throughout the Water Plan is the lack of comprehensive current data. Due to the historical lack of monitoring it is hard to support any of these projections.”

“The challenge is serving west Molokai,” said  Molokai farmer and University of Hawaii extension agent Glenn Teves. “County has approved two hotel sites and also hundreds of house lots that have yet to be built such as Moana Makani. Once approved, water needs to be allocated for that use. This will create a clash in Kualapuu aquifer.”

Teves also explained that “the problem is the water needs per acre are increasing due to climate change. Last year in August we were up to three acre inches per acre. This needs to be figured into the water use equation.”

Community members wanted more specifics on these sources, as well as adherence to preceding community plans.

“Desalinization was voted down in the Molokai community plan. The water plan needs to be consistent with the community plan,” explained Teves.

A finalized draft for the Molokai Water Plan is forthcoming following community input during this current comment period.

Molokai residents can view the preliminary draft at https://waterresources.mauicounty.gov/DocumentCenter/View/639/Preliminary-Draft-Molokai-Water-Plan.