He has helped to save countless Molokai lives. He is the longest serving, active paramedic in Maui County. He is Melvin “Mel” Paoa, Jr., the island’s first certified paramedic to serve on Molokai. And on May 30, he retired after 35 years of service.

“This is not a job, this is a love for the community and the people,” said Paoa. “I have mixed emotions on retirement. I’m not ready to divorce myself from the people.” 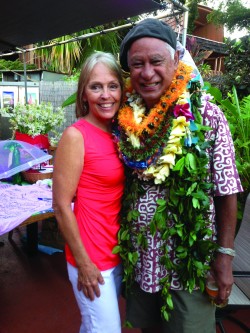 Paoa’s career in medical services began in 1975 as a lifeguard for the County of Maui’s Cooke Memorial Pool. While there, a county official asked if he would like to take a first aid class, which he did. Then he was offered the opportunity to become a first aid instructor, since the American Red Cross had left the island and there was a void to be filled. Next, Paoa was asked if he wanted to take a CPR class, which led to him becoming a CPR instructor. He taught first aid and CPR classes on both Molokai and Lanai. The next step led Paoa to become a First Responder and after that, an Emergency Medical Technician (EMT).

“The paramedics used to come swim at the pool when I was a lifeguard,” said Paoa. “Every week was a different paramedic, and I asked, ‘How come you guys always have somebody different?’ They said ‘Nobody wants to work here.’ I said, ‘how about hiring a guy from Molokai?’”

Paoa was hired by International Life Support, and continued when American Medical Response (AMR) took over the emergency medical services contract in the 1990s. With another year of intensive training on Oahu through Queens Hospital, Paoa became a Medical Intensive Care Technician (MICT) and returned to work on his home island. During his long career, Paoa has treated thousands of residents in their time of need.

“It’s really hard to work on Molokai because half the people you’re related to, the other half you know,” joked Paoa at his retirement celebration, held two weeks ago.

“He was the first [paramedic] from Molokai,” said fellow AMR Scotty Schafer. “He’s the one who broke the barrier. All the other guys that went to [paramedic] school, we all owe it to him.”

Known to fellow AMR staff as “the mellow one,” Paoa has a unique way of working with people. Under difficult and stressful emergency situations, Paoa is known to keep his calm, composed demeanor while working skillfully with patients and families, according to his co-workers.

“My main goal when I went to their house was to make them smile or laugh on the way to the hospital because they feel better that way,” said Paoa.
In addition to his career of emergency response, Paoa is also the Molokai captain on the Hokule`a, the Polynesian double-hulled voyaging canoe. He has sailed on numerous voyages throughout the Pacific including trips to Tahiti, Cook Islands, Samoa, Marquesas, Aitutake, Pitcairn Island, and Japan. In his retirement, he plans to serve as captain on some of the upcoming legs of the world wide voyage of Hokule`a and sister vessel, the Hikianalia, beginning this summer.

“I’ll be glad to have him home, that he’s healthy, and that he’ll get to go sailing because that’s what he wants to do,” said Paoa’s wife Donna.