Fourth generation Molokai paniolo Uncle Jimmy Duvauchelle literally entered this world into the hands of a cowboy. When he was born in Kalamaula in the 1940s, there were only two doctors on the island — and when his mother went into labor, one doctor was in Honolulu and the other was busy, said Duvauchelle.

“My dad didn’t know what to do and panicked,” he chuckled. So he ran down the road and called for help from the only person who was experienced in delivery — an old time cowboy.

Back then, paniolo would be there with their cattle “whether it’s 3 in the morning or 3 in the afternoon,” said Duvauchelle. “Sometimes when we come home after branding we have to bathe twice because we’re so dirty. Can you imagine a cowboy helping during a birth?”

But mother and son were both healthy, and baby Jimmy was named after the cowboy who delivered him, James. 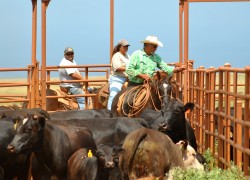 “My whole life was influenced by cowboys,” he said. His father was a roughrider, and the paniolo tradition went back to his great grandfather. Duvauchelle was raised by his uncles on Molokai Ranch, and when he graduated high school, he was told he could either work in the pineapple fields or become a rancher.

He chose the latter, and for the next seven years, worked as a paniolo for the Ranch.

“He was part of a really good time in Molokai Ranch’s history,” said former Ranch manager Aka Hodgins, who originally hired Duvauchelle. “He loved it — truly all his life he wanted to be a cowboy — and that’s what he was.”

After the Ranch’s foreman retired, Duvauchelle took his position, and eventually worked his way up to supervisor, then livestock manager.

Duvauchelle worked for the Ranch for 42 years until they closed their operations in 2008.

Memories of the Old Days
Ranching cattle was a different game in the height of Duvauchelle’s career. Ranging 5,000 or 6,000 acres, cattle would become wild — called pipi `ahiu. With little human contact, the animals would turn aggressive, and when herded during round-ups, cows would often break loose from the group. Cowboys would have to chase and catch them individually with a rope.

“Once you capture the cattle, the fun part is to get up close and rope them as fast as you can,” said Duvauchelle. “The hard part is bringing them back to the corral” — sometimes miles — while keeping the cattle, horse and cowboy safe. “The wild cattle want to chase you and knock you off your horse.”

The hard work didn’t end there. Cowboys had to train horses — often done by blindfolding them to jump on, according to Duvauchelle.

“Then we’d take blindfold off and all hell breaks loose,” he said. “That was our breakfast. Every day we’d come back with broken pants and holes.”

Then there was installing fences.

“In the old days, we used to dig kiawe posts by hand — it was real hard work,” said Duvauchelle. “We did a quarter mile in one day with four or five guys.”

But it wasn’t all drudgery for the paniolo.

“My best times were when we were out driving cattle. The cowboys would have to get up early in the morning and go down towards Ilio Point,” recalled Duvauchelle. “We’d put opihi knives in our pockets and run our horses along the beach.”

After filling bags with opihi, they’d drive the cattle back up the hill, eating opihi for lunch and dinner. That’s how the term “cowboy opihi” was coined — fishermen would leave the higher opihi for the paniolo — “we didn’t want to get wet,” Duvauchelle chuckled.

“It was so much fun — we got the work done, and a little extra curricular.”

Now, he said the work of a paniolo has changed. The biggest pasture is about 100 acres, so cattle are more tame and easier to handle. Changes in technology allow cowboys to install five miles of fencing in one day with a post-driller. Economics now drive the cattle industry.

Retirement
When Molokai Ranch closed in 2008, Duvauchelle said they gave him opportunity to buy the cattle at reasonable price and remain on the land. Since then, he’s been independently operating Pohakuloa Ranch, leasing 3,000 acres from the Ranch.

He worked with his kids and grandkids — fifth and sixth generation paniolo — and the family did cattle drives together. But two weeks ago marked Duvauchelle’s last drive — and the end of a family tradition.

Molokai Ranch’s new management announced they planned to re-enter the cattle industry, and — in order to avoid a conflict of interest — Duvauchelle gracefully announced his retirement. Selling his cattle and assets to the Ranch and moving from his Maunaloa home of more than 25 years, he ended an era. He said he plans to take things one day at a time.

“How do you erase a lifestyle, how do you break away from a dream?”

To keep busy, Duvauchelle and his wife plan to focus on another passion. Over the past 15 years, they’ve opened up their home to more than 60 abused Molokai youth as the island’s only emergency shelter with Child Protective Services. Ten of those foster children they’ve officially adopted, ages 6 to 17.

“That keeps me going — those kids,” he said. “All my life on Molokai, I never knew we had this problem until I got involved.”

Duvauchelle will also continue his work as a minister at Irusalema Pomaikai Church.

In the meantime, he and his family plan to leave the land he ranched for nearly 50 years and move to town.

“Every time I go up there [to Maunaloa], it gets harder to leave,” he said. “I told my wife, ‘We better move down Kaunakakai as fast as we can.’”

His contributions to the paniolo tradition haven’t gone unnoticed. Duvauchelle was inducted into the Paniolo Hall of Fame in 2000. In 2002, he was chosen to represent Hawaii’s cowboys, along with five other distinguished paniolo from Hawaii Island, in the grand opening parade of the national finals rodeo Las Vegas, where he said he was proud to be the one to carry the Hawaiian flag. Duvauchelle has also been featured in numerous Hawaii magazines.