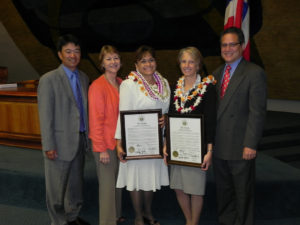 The Maui Invasive Species Committee (MISC), as well as its state-wide counterparts including the Molokai ISC, were recognized for their biological control program by the Hawaii State Senate. Molokai resident and MISC member Lori Buchan and other representatives received the award last week.

MISC was the first Invasive Species Committee to form in 1999. The group works to protect the Valley Isle from non-native and harmful species like coqui frogs, pampas grass, veiled chameleons, and miconia. The partnership brings together scientists, resource managers, foresters, botanists, wildlife biologists, and representatives from county, state, and federal agencies to contribute their time and expertise. On Maui, ISC staff tackles 20 differently species of invasive plants and animals.

The Invasive Species Committees are projects of the Pacific Cooperative Studies Unit and the Research Corporation of the University of Hawaii. The ISC’s are island-based partnerships on Kauai (KISC), Oahu (OISC), Maui (MISC), Molokai (MOMISC), and the Big Island (BIISC) that work with government agencies, non-profit organizations, and private businesses and landowners to protect each island from the most threatening pests with a proactive approach.