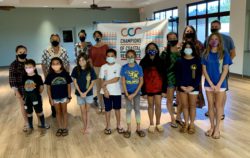 Over the last year, students from Kualapu’u and Kaunakakai schools in grades four through six showcased coastal ecosystems, climate change, stewardship suggestions and a strong sense of place through digital storytelling. Participating in a program called Champions of Coastal Resilience (CCR), the students learned virtually about Molokai’s coastline areas, creating short video snapshots of a place that’s important to them and their ‘ohana. CCR was funded as part of the 21st Century afterschool program and since COVID, students worked independently to produce their educational videos. Last week, families, students and supporters of the program gathered for the first in-person CCR Film Festival held at Lanikeha to view the students’ work, which was also livestreamed on Zoom.

CCR has three main educational focus areas, said Joyce Haase, a Kaunakakai School sixth grade teacher and Molokai program coordinator for Learning Endeavors, the organization that spearheads the statewide CCR program. CCR teaches students about coastal ecology while using science tools such as sea level rise modeling. It also encourages taking action to focus on stewardship and how to malama the places we care about.

Student videos highlighted locations around the island from Papohaku Beach to Wailau Valley. Some youth discussed coastal native or invasive species, while others addressed pollution, sea level rise and other issues affecting Molokai’s shorelines and watersheds.

Adapting to the challenges of learning during the pandemic, the Molokai CCR program created a series of virtual field videos instead of taking group field trips, partnering with local experts acting as site hosts for various ecological sites around the island.