Ingenuity on Display in Holiday Expo 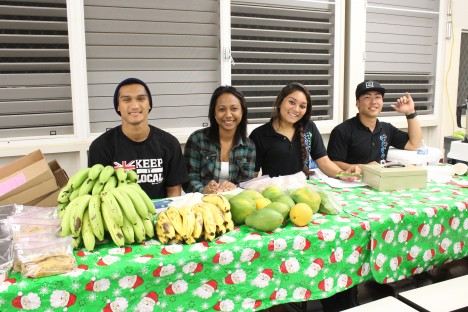 Trix cereal treats, ceramic fish and studies on legumes in soil—all of it came from the minds and hands of Molokai High students at the school’s Holiday Exhibition last Wednesday. A collaboration between the Fine Arts department and Career and Technical Education (CTE), the exhibition gave the public a glimpse of the projects students are creating to meet needs and solve real-life problems on Molokai.

As part of hypothetical businesses created in class, students offered samples of food, haircut services, jewelry and other products to potential customers passing through the exhibition in the school’s cafeteria. Aliana Eustaquio and Ida Pongmulee invented a business called Molokai Upcycling, taking used clothes and transforming them into newly designed jean shorts, skirts and bow ties.

“I like to upcycle things so it has a new meaning to it,” said Eustaquio, who grew up watching her grandmother sew.

As an MHS athlete, John Michael Mokiao-Duvauchelle said his idea was setting up a sporting goods store so that people wouldn’t have to wait for online purchases or go off-island to shop.

“On Molokai it’s hard to get the equipment that you need,” said Mokiao-Duvauchelle, who added he would consider opening up such a store in the future. “I decided to make it easier for the community.”

Many products were for sale, which Principal Stan Hao said will help fund departments the products came from. Students sold personal artwork, including canvas paintings and ceramic dishes. They piled tables with papayas and bananas that CTE coordinator Kai Sawyer said the school has been growing for a year in preparation for the exhibition. They also brought plants cultivated in the campus greenhouse and used some of their produce to cook steaming pots of luau stew and kim chee.

“They take the revenue and put it right back into the program,” said Hao. “[It’s] a sustainability situation.”

At the Science Fair in the library, a panel of community judges interviewed the school’s student scientists on their experiments and studies. Some groups said they were inspired by the issues they noticed in their own communities.

A project by sisters Sarah and Lily Jenkins was prompted by the effects of mangroves encroaching on Molokai’s coastline. They explained that mangroves were originally introduced to Molokai in 1902 to protect the shore from erosion, but the trees have now become an invasive species that has changed certain ocean properties and introduced other invasive creatures. In mapping the Molokai shoreline, they discovered that mangroves have invaded over 60 percent of the island’s fishponds and threaten to overtake coral reefs.

“Our project is for the education of the community,” said Sarah Jenkins. “… We need to develop this management plan now to try to remove it as fast as possible, because the impacts it has are very, very tragic.”

For their project, Awa Yerhot and Jacob Norris set out to discover whether microwave stimulus could affect radish crops. They microwaved radish seeds in packets, planted the seeds and harvested them a month later. The discovered that the longer they microwaved the seeds, the bigger the radishes grew but the smaller the yield became, and vice versa.

“Ideally you want a combination of the two,” said Norris. “We’ll have to find sort of an optimization.”

Judges selected the best overall projects to go to the Maui District Science and Engineering Fair on Feb. 4-5. Eight teams will travel to Maui: Cendall and Caele Manley for their project “Bring V.A.K Back;” Noah Keanini for “The Best Battery;” Alexandria Simon, Amber “Momi” Afelin and Keaaokahonua Davis for “Investigating Agar Extraction;” Lily and Sarah Jenkins for “March of the Mangroves;” Awa Yerhot and Jacob Norris for “The Effects of Microwave Stimulus on Radish Seeds;” Jarron Boswell for “Denaturing of Proteins;” Genevieve Kikukawa for “Enhancing Soil with Legumes;” and Edel Mae Alvarez and Rebecka Adolpho for “Okra, Aloe Vera, Liquid Starch.”

Watching the kids’ enthusiasm for business, art and science, said Sawyer, was a big reward for the faculty after all of the teaching, prodding and toiling in the weeks leading up to the exhibition.

“Our kids work hard,” said Sawyer. “It’s so nice to finally get to this point. To see them excited and motivated about their ideas … made it worth it.”