A $1.2 million project to replace a 19,500-gallon steel water tank in Ho`olehua with a sturdier concrete tank is nearing completion. It’s a replacement that the Department of Hawaiian Home Lands (DHHL) hopes will provide a better long-term solution for water pressure problems in the area. 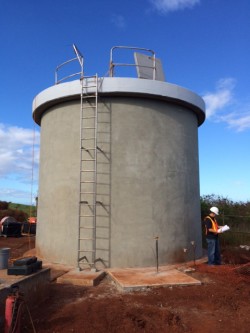 However, the salty air took its toll on the steel, and the tank sustained damage from residents who sometimes use it for rifle target practice, said Ayau. After multiple repairs, the Department of Health, which oversees water sanitation, decided concrete would be a more cost-effective long-term option.

At the beginning of this year, general contractor Goodfellow Bros., Inc replaced the steel with 12-inch thick reinforcing concrete walls, according to project engineer Kaiao Goodhue. They’ve also fixed defective valves and worked on pipes underground. The tank will also be fitted with a Supervisory Control and Data Acquisition (SCADA system, which allows the department to remotely control the water system, a feature that was lacking on the steel tank.

“All water systems in Ho`olehua rely on gravity flow,” said Ayau. “… Because it’s a 20-inch pipe and it’s coming from mauka to downhill, by the time it gets here the amount of pressure is tremendous.”

The tank, which is located a mile east of Puupeelua and Moomomi Avenue, works with a similar tank near the post office to release pressure before water is distributed into homes.

Goodhue said they’re on target to finish the project by the end of August.

The DHHL is also undertaking a project to improve and protect one of Molokai’s homestead cemeteries.

Kanakaloloa Cemetery has stood on Ho`olehua Homestead land for more than 75 years. The rough dirt roads bordering the triangular-shaped property can prove treacherous to cars during rainy winter months, so the department plans to pave paths along and through the middle of the cemetery for easier access.

Some community members have also raised concerns over after-hours disturbances. Lucy Whiting, whose home has bordered Kanakaloloa Cemetery since 2009, said she hears the noise but is more concerned by the evidence she’s found of possible drug deals at the cemetery, including packs of money tucked away at headstones, which other community members have also reported to Ayau.

The department plans to install a three- to four-foot high rock wall near the cemetery entrance. While it can’t prevent all unauthorized visitors, it can prevent unauthorized vehicle access, according to the draft assessment.

There are also plans to add a 13-stall parking area and a 1,250-squre-foot open air pavilion to provide a sheltered place for funeral services or for families to gather during visits.

“It’s our duty to provide a higher level of service for our homesteaders and their families when they pass away. A paved road, that should be basic,” said Ayau, pointing to the nearby Veterans Cemetery, which has a pavilion, a paved road and a wall.

The proposed improvements were published in the bulletin of the Office of Environmental Quality Control on July 23 and are currently under public review. The Office has 30 days from the publishing date to approve the project.