This Thursday morning, Ilia Reyes is hoping he wakes up feeling good. It’s a big day for the Molokai-born swimmer. He’ll be competing in the Olympic trials — a goal not even his family dreamed of when he began swimming at Kaunakakai’s Cooke Memorial Pool at age 8. 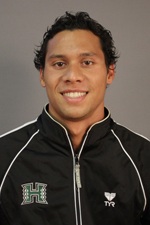 “For swimming, you wake up that morning and you either feel good or you don’t,” said Reyes, who graduated from University of Hawaii last fall, where he set state records and proved himself against international competition.

The summer before his junior year at UH in 2009, he broke the Hawaii record for the 50 meter freestyle and qualified for the Olympic trials by making the cut — 23.49 seconds — in the event.

Now, he will be competing in both the 50 m and 100 m freestyle events against some of the world’s best swimmers to earn one of 26 spots on the U.S. Men’s Olympic team. The trials are held in Omaha, Nebraska, from June 25 to July 2.

“This guy has set a precedence already, no matter what sport — that’s fantastic,” said Lloyd Yonemura, Reyes’ first coach on Molokai. He added that if Reyes does make the Olympic team, Yonemura believes he will be the first Molokai athlete to make it to that level in any sport.

Despite the pressure, Reyes stays grounded. Swimming has become more than just a sport for the Molokai native.

“I’m the person I am today because of swimming,” he said. “It teaches you… motivation and self-confidence, [to be] mentally tough. It brings out a better person in you.”

Practice Makes Perfect
Since graduation, Reyes has been training on Oahu with UH coach Victor Wales. He has been logging long hours in the pool, with nine practices over each six-day week, each session two to two and a half hours long.

“It takes a lot, you have to be in the water every day — it’s all about feel,” Reyes said.

He calls his goals for the trials “realistic.”

“I just want to get a second swim,” he said, explaining that as long as he makes top 16 in the trials, he will be able to compete again in the semifinals, and then hopefully the finals.

Banner made for Ilia by his Molokai ohana. Photo by Louann Reyes

Reyes also hopes to break the current Hawaiian record for the 50 freestyle — a time he set in 2009 and another swimmer broke earlier this year. The current record is 23.32 seconds and Reyes said he’s shooting for 22.9.

“It’s pretty amazing,” said Reyes’ mother, Louann, of his accomplishments. She and Reyes’ father Fred, who live in Kaunakakai, are in Nebraska to watch their son race. “It takes a lot of focus to stay in the sport that long — just watching a black line on the bottom of the pool,” she said.

Early Beginnings
With his mother’s encouragement and following in his three sisters’ footsteps, Reyes began swimming at age 8 under the coaching of Yonemura. Louann told him to “do your best and see how far you can get,” she said. “[Swimming was] something the family did.”

Yonemura, a USA Swimming certified coach, remembers the young Reyes as just another kid in the program, but that he “started coming out the last two years of high school [at Kamehameha.]”

Now, as Yonemura prepares to watch his former student swim at the Olympic trials, Yonemura said he’s nervous for him.

“Main thing is, he’s not last,” he chuckled. “He usually gets off to a quick start and is a strong finisher — that’s what I’m counting on. We’re talking about [winning by the length of] finger nails here.”

“Coming from Molokai, I think a lot of people respect that more,” Reyes said of his humble beginnings.

Gearing Up
Far from Kaunakakai’s concrete pool, Reyes and his competition will be enjoying state of the art facilities at the Olympic trials. According to USA Swimming’s Splash magazine, two special above-ground pools were constructed in 12 days by 38 workers on 16 to 18-hours shifts. The pools will hold a combined two million gallons of water, heated to temperatures strictly controlled by gas heaters. Some materials came all the way from Castiglione, Italy, over 5,000 miles away.

Over 13,000 seats will surround the pool. At the 2008 trials, the total attendance topped 160,000 for the 15 total sessions. For local fans who can’t make it to Omaha, this year’s trials will also be broadcast live on NBC.

The 2012 Olympic Games will be hosted by Great Britain and will be held in London. The swimming events will be held between July 28 and August 4.

One Response to “Ilia Reyes: Making a Splash”