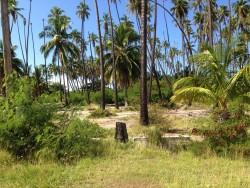 The grove before renovation. Photo by Gayla Haliniak-Lloyd.

Just weeks ago, Molokai’s historic Kapuaiwa Coconut Grove was thick with shrubs, piles of dead fronds and manmade trash. Now, after a thorough weeklong overhaul, the ground is bare and smooth, the fallen tree trunks are stacked neatly and Molokai residents see what many of them said they remember growing up: an unobscured view of the ocean between the towering palms.

“We’re happy it’s clean. It’s like we got back the old Coconut Grove,” said Kalamaula Homestead Association President Gayla Haliniak-Lloyd, who said the last clean-up was about four years ago.

The Department of Hawaiian Home Lands (DHHL), which owns land the property, organized the cleaning in response to community meetings in May and June during which many Kalamaula residents pointed out the grove’s deteriorating conditions. DHHL contracted Molokai company Akamai Tree Trimming to uproot the abundant haole koa shrubs, and clear fallen coconuts, leaves and natural debris.

“Most of [the workers] are homesteaders,” said Halealoha Ayau, DHHL Molokai acting district supervisor. “You can see the pride in their work. I had to get them to stop last night because they were working till 6 p.m.”

In the future, Ayau said the DHHL is considering paying a contractor to do quarterly clean-ups. With only one maintenance worker on staff, he explained, regular upkeep is difficult. 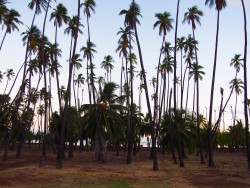 The grove after restoration. Photo by Colleen Uechi.

Trees in the grove still suffer from a fungal disease discovered last December, but Ayau said getting the grove cleaner and safer was the first step in a long rehabilitation process. In June, the department reached out to the State Historical Preservation Division (SHPD) for guidance in fencing off the property to prevent human intrusion and possible injury from falling coconuts and trees. Once the clean-up is complete, surveyors can finish outlining where the fence can run, said Ayau. SHPD must then give final approval.

Haliniak-Lloyd added that homesteaders want to form groups in charge of doing weekly checks to pick up leaves and clear any rubbish around the springs. They also hope to accompany the proposed fence with signs detailing the history and sacredness of the grove.

“When you keep educating and reminding [people], they going know the value of that place, especially the young ones,” said Haliniak-Lloyd. “When I was young too, it was kapu [to go in]. Nobody could go next to the springs.”

Ayau said partnership with the community is needed to help take care of the grove.

“We took a big hit in budget cuts for fiscal year,” he said. “We’re gonna have to rely on volunteer help.”

For more information about getting involved with a grove maintenance group, Haliniak-Lloyd said residents can email kalamaula@live.com.

One Response to “Iconic Grove Restored”