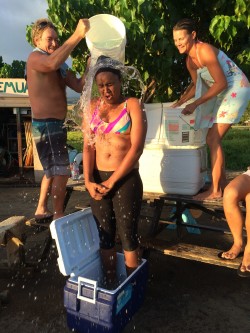 The ice challenge took Molokai by frozen storm in the last two weeks, joining a national movement to raise money for cancer. Across the U.S., participants of the ice challenge are calling out friends to dump buckets of freezing water on themselves and donate to charity. In Hawaii, the ice challenge is primarily raising money for cancer, and many on Molokai are using the opportunity to contribute to the Molokai Cancer Fund through the upcoming Relay for Life.

If you’re a Facebook user, you’ve probably had your newsfeed flooded with videos of your friends gasping, shrieking and shivering under a stream of ice water. Wondering what it’s all about? Local informal rules call for at least two buckets of ice water to be poured over your head by willing (or eager) friends. As part of the challenge, you “call out” friends to do the same, and they must follow icy suit within 24 hours. In addition to enduring cold water gushing over your head, you also must donate $20 to a cancer awareness organization of your choice. If you chose not to complete the challenge, you’re asked to give $100 instead.

The challenge was so popular on Molokai, in fact, that by July 4th weekend, many stores had run out of ice altogether.

In addition to raising money, the ice challenge is reportedly intended to simulate the chills and aches experienced by many cancer patients during chemotherapy treatments.

While some have criticized the challenge for belittling what cancer patients actually go through, many challenge participants say they gained a greater appreciation for what friends and loved ones have suffered on a much greater scale.

“[After doing the ice challenge, I feel] like I never want to go through chemo,” said challenge participant Courtney Turner. “That was horrible.”

A few Molokai residents chose not to endure the fringed blast but still participated by posting Facebook videos sharing a talent or tribute to loved ones who suffered cancer and called on friends to donate to the cause.

Other fundraising efforts on Molokai have included a campaign called “Tired of Cancer” in which purple-painted tires are being passed around the community. The tires — an initiative by this year’s Relay for Life Team Arlan, led by Molokai cancer survivor Arlan Angco – are making their rounds in people’s yards for 24 hours each. Recipients donate money to the team to host the tire, then pass it on to a friend or family member.

On his Relay for Life team page on the American Cancer Society website, Angco shares his story of fighting stage four cancer.

“I have come full circle as a supporter of others, to a patient and a survivor and now back again to a supporter of others,” he wrote. “I have benefited personally from the fundraising efforts of Relay for Life with travel expenses and lodging being paid for while going through treatment and recovery… This is my opportunity to honor cancer survivors, remember people we have lost, and help raise funds for the American Cancer Society.”

The Molokai Relay for Life will be held on Aug. 8 at Kaunakakai Ball Field starting at 6 p.m.