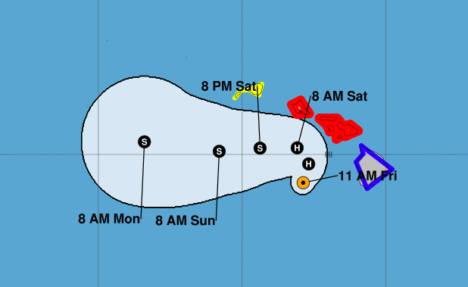 Molokai residents spent last week bracing for Lane, a category 5 hurricane that appeared to be headed directly towards the island before taking an abrupt turn west, being downgraded to a tropical storm and breaking apart. Waiting in anxious anticipation of the next report on the erratic and unpredictable storm track, Hawaii residents spent a tense few days unsure of how damaging the storm might be. Many neighborhoods looked like ghost towns, with windows boarded up in anticipation of the storm.

Much of the island was left without power for as long as 12 hours Thursday night and Friday. Though Molokai escaped other storm-related damages unscathed, Maui and Hawaii Island experienced extensive flooding and road closures. Had Lane remained a hurricane force storm, the outcome could have been much more devastating.

With its track uncertain and the hurricane showing no signs of weakening early in the week, schools across the island closed on Wednesday, Aug. 22 through the end of the week, along with all non-essential county offices. The landfill and post offices closed Thursday.

On Thursday, the American Red Cross opened Molokai High School as a storm shelter. At peak, the gym housed 21 Molokai residents, according to the Red Cross, which opened and operated shelters around the state.

As of Friday morning, Maui Electric reported that 2,600 customers were out of power and by that afternoon, crews were continuing to restore electricity to the remaining 1,800 customers still experiencing outages. Many residents thanked electric crews on social media for their work to repair the island’s power lines.

Many local stores stocked extra food and supplies in anticipation of the storm, and stayed open as long as the electricity remained on.

Young Brothers barge stopped sailing the later part of the week and announced its regular schedule would resume on Monday, Aug. 27. That means Molokai’s next barge will arrive on Thursday, Aug. 30.

On Maui, flooding and landslides caused damages to roads and led to many road closures. Hawaii Island had significant damages from rainfalls totaling more than three feet and several stranded people were rescued from areas of heavy flooding. No storm-related deaths were reported in the state.

Fueled by the heightened winds of Lane, several fires burned on Maui last Friday, destroying or damaging at least 21 structures and leaving more than 50 without their homes. Some have family ties to Molokai, and fundraising efforts on GoFundMe have been circulating on social media to lend assistance.

The highest gusts from the storm on Molokai reported at the Ho’olehua Airport were 43 miles per hour on Aug. 23 but higher unofficial wind speeds were reported in other areas. Most Molokai residents said they experienced some wind and rain. East end residents reported the rivers were flowing but not making the highway impassible.

Hurricane season extends through November and weather forecasters are watching another storm, Miriam, as it tracks towards Hawaii. It’s too early to tell what effects it will have on the state, but it’s expected to strengthen from a tropical storm to a hurricane early this week.

Officials advise residents to continue to be ready for a hurricane, keep food and water well-stocked and keep emergency kits and supplies handy.