Hundreds Visit the Hokule‘a on Molokai 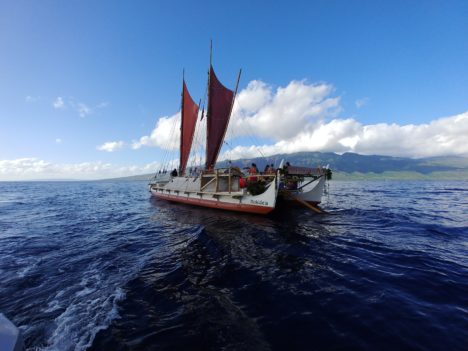 Hundreds of local residents, including schoolchildren, visited the Hokule‘a sailing canoe while it was docked at Kaunakakai Wharf for 10 days. The flagship canoe of the Polynesian Voyaging Society came to Molokai as part the Mahalo, Hawai‘i sail throughout the Islands, and is scheduled to depart Kaunakakai and sail to Oahu today, weather permitting.

Before the Hokule‘a left Hawai‘i for its three-year Malama Honua Worldwide Voyage in May 2014, the canoe went to several communities around the Hawaiian Islands, including Molokai. During its worldwide voyage, the Hokule‘a sailed more than 40,000 nautical miles, visited 150 ports in 18 countries and eight Marine World Heritage sites. More than 200 volunteer crewmembers connected with more than 100,000 people across the globe.

“I’m bringing the Hokule‘a to Molokai to mahalo Molokai for all the support and aloha, and also to share the stories of our Malama Honua Voyage with the children, the next generation, and the people of Molokai,” Hokule‘a capt. Kawika Crivello said.

Since the iconic sailing canoe returned home last June, it has been sailing around the Islands to reconnect with the local communities, sharing their stories and lessons acquired during the worldwide voyage. In the last couple weeks, it was Molokai’s turn to be visited by the Hokule‘a and its crew, many of them Molokai residents.

Hawaiʻi’s legendary double-hulled canoe arrived at the Kaunakakai Wharf Dec. 19 at about 5:30 p.m., after sailing 12 hours and 90 nautical miles from Hana, Maui. Here, the crew hosted more than 600 island visitors, including at least 300 students, by last weekend. The students participated in hands-on voyage and malama honua-inspired activities, and also learned from crewmembers everything from knot-tying to what it’s like to sail around the world in a Hawaiian canoe. By the time Hokule‘a was expected to leave Molokai Wednesday, Nov. 29, more than 1,000 people were estimated to have visited the canoe.

Mahinahou Ross, a local educator and veteran voyager of the Malama Honua Worldwide Voyage, said he remembers when the Hokule‘a came to Molokai, when he was still an elementary school student at Kilohana.

“Never would I have thought in my wildest dreams that one day maybe I’d be able to sail on her and experience beautiful places,” Ross said. “It’s such an amazing feeling these past few days … to have the kids come down and see and touch Hokuleʻa and know that they one day too can sail Hokuleʻa.”