Hula Shores Renovations to Begin in 2013

Four months after a fire in June destroyed Hotel Molokai’s kitchen, rebuilding is scheduled to begin in January, according to the hotel’s General Manager Michael Drew. The Hula Shores restaurant has been closed since the fire, which caused approximately $650,000 in damages and left 35 unemployed. Since then, staff and crews have been busy with demolition and clean-up of the building’s charred remains and drafting plans for the new construction.

“The kitchen, bar and dining room will have a new look,” said Drew. He said the renovation design will be a “complete make-over, but keeping the Hawaiian theme,” with features that will be “more user friendly for kitchen and dining staff.” 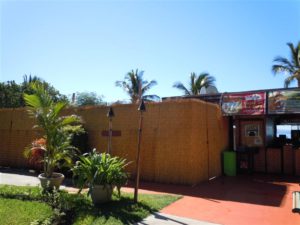 After the fire, Drew estimated the facility would be rebuilt and opened by December of this year, but he said the timeline has been delayed. Currently, hotel staff are working with designers and contractors to finalize building plans, which will be submitted to the county for approval in four to six weeks. Drew said they will share building plans with the community once they’re approved.

Drew said once the county grants the building permits, construction is planned to begin in early January. The new facility will take four to five months to complete, estimated Drew, after which a grand re-opening will be held.

In the meantime, the bar remains open daily from 4 to about 9:30 p.m., and on Fridays from 3 to 10 p.m. Na Kupuna continue to provide live music on Friday evenings from 4 to 6 p.m. In the next two weeks, Drew said a limited menu will become available with grilled options including burgers, sandwiches and salads under the direction of kitchen manager Gene Pike.

“Throughout this process, we will update the community,” said Drew.