How to Say E Komo Mai

While it is pau hana time for most teachers, Kumu Manuwai Peters and a few of his students are at Ho`olehua Airport getting ready for a busy afternoon. Holding an ukulele in one hand, Peters straightens a student’s kukui lei, all the while reminding the four student-volunteers to be professional, smile and engage visitors coming off the plane. By the time the next plane touches down, Peters and his band of students are already at the arrival gate, instruments, lei and smiles ready. As soon as the door opens, the group breaks into a traditional Hawaiian mele, or song, welcoming visitors and residents to Molokai.

The airport greeting program, called Kahau Pae `Ike, started last month as a partnership between Molokai High School (MHS) students, the Molokai Visitors Association and the State Department of Transportation Airports Division. Essentially, a group of three to five students from two of Peters’ classes –Hawaiian language and Arts and Communication –volunteer to gather at the airport on Tuesday and Thursday afternoons to greet people as they come off the plane. 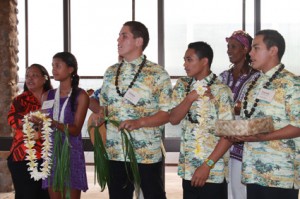 “I want people to see there’s a really vibrant population on Molokai that cares about our traditions and to maintain the tradition of welcome,” said Peters. “And [I want them to see] that Molokai youth show great promise.”

One of Kahau Pae `Ike’s visions is to prepare students for jobs at a professional level, and to ensure they are “effective 21st century communicators,” according to Peters. He makes sure each of his student-volunteers arrives prepared, dressed neatly in uniform and ready to work. As preparation, he makes sure the students are versed in greeting phrases in over 20 world languages, including Japanese, Spanish, Italian, Tahitian, Maori and Hawaiian.

“I’ve learned how to act when I’m on the job or when I’m talking to other people,” said MHS student Hikili`i Chow, 15, who has been greeting airport guests since the start of the program. “People are glad that opio –young people – are coming out to do it…[we] actually care about our island and set a good example for other generations.” 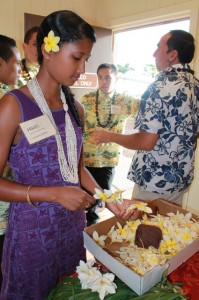 Peters said he hopes to see the program continue and grow its presence at the airport. As of now, all the flowers and fruits are picked from the high school or donated by the community, and all efforts are volunteered. He hopes to be able to secure funds from the county to help grow the program, he said.

Till then, you may find Peters and a small group of students with ukes and lei in hand, greeting new and old friends with song, dance and smiles.

3 Responses to “How to Say E Komo Mai”