An early morning fire at Hotel Molokai on Tuesday gutted the kitchen, laundry and storage rooms, causing an estimated $650,000 in damages. Now, the Hula Shores restaurant and bar are closed indefinitely, and 35 employees are out of work. 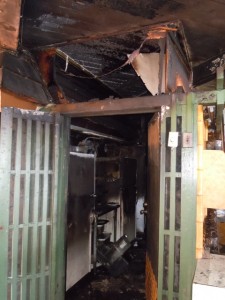 The door to the now-charred kitchen of Hotel Molokai. Photo by Catherine Cluett

Firefighters responded to the fire just before 3:30 a.m., and found about 75 percent of the bottom floor of the two-story structure engulfed in flames, according to Maui Fire Services Chief Lee Mainaga. A Maui fire inspector said the fire’s cause is undetermined but concluded it was accidental. The inspector said it started in the storage room behind the kitchen, which was padlocked when the blaze broke out.

Guest ‘Heroes’
The hotel’s 50 guests staying there at the time were evacuated but returned to their rooms that evening, according to hotel manager Michael Drew. It was a guest that first noticed the fire and took action. Another longer-term guest who had gotten to know the staff called Drew at his home nearby. When Drew arrived, he said he went door to door gathering guests outside, though no occupied rooms were affected by the fire. The unoccupied honeymoon suite, above the storage area, was the only room damaged.

Drew called many guests “heroes” for dialing 911 and helping to douse the flames. He said some of them happened to be volunteer firefighters and policemen from visiting from the mainland.

“They all pitched in with hoses and helped to try to contain the fire,” said Drew. “They were heroes.”

No injuries were reported.

Because of the fire, Maui Electric Company shot off electricity to the facility, which resulted in loss of electricity to Kaunakakai for the majority of the day Tuesday, said Drew. Water was also shut off at the hotel after the fire was suppressed due to the water gushing out in the kitchen. Both water and electricity were restored around 6 p.m. that day. 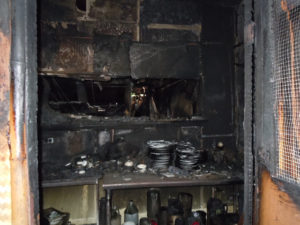 The structure, which is more than 40 years old, is still standing, but its contents are left in charred ruins. George Joosten of Beachtree Properties, which manages Hotel Molokai, said they plan to eventually rebuild.

“The good news is this is a sustainable place and part of the island – we’ll be back,” he said.

But it could be a while. Joosten said the company is still waiting on insurance inspections and other paperwork before they can even begin the cleanup process. Here is great info on pests and how it can be handled easily before it turns into a serious issue.

In the meantime, the bar also remains closed and entertainment programs have been canceled until further notice. The hotel’s current liqueur license requires a certified kitchen on property, according to Joosten. Drew said they hope to change their liqueur license to allow the bar to reopen as soon as possible, but that process has not started yet.

Until the bar can reopen, the fire has left 35 employees without work.

“Hula Shores is more about those 35 people than it is about the restaurant and bar,” said Joosten. “We can only imagine the devastation on them.” 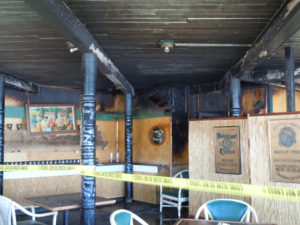 Joosten said Hotel Molokai has had no major fires in the past. The rooms were renovated in 2008, but since Beachtree began operating the hotel in 2004, he said the kitchen has only had replacement of individual appliances without a full renovation.

“The good news is we have insurance and it should cover recovery,” he said, calling the fire “an opportunity” to improve facilities in the future.

Joosten said the hotel continues to operate. He said Beachtree has notified guests with reservations of the situation, adding most have indicated they still plan to visit.

Joosten and Drew said they have received a lot of support from the community. Jerry Johnson of Paddlers Inn offered a freezer for food storage, Coffees of Hawaii donated coffee for the hotel’s lobby, Molokai Chamber of Commerce offered assistance, along with other local businesses, organizations and individuals.

“A lot of locals have come by to help us,” said Drew.