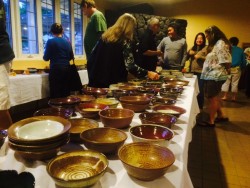 Nearly 20 artists of all levels crafted ceramic bowls for the hundreds of people who showed up at the event, held at the Molokai Community Health Center. Guests could choose from 578 different bowls to eat soup from and later take home.

“One of the things that I appreciate about ceramics as an art is that it’s really functional,” said MAC Development Director Helen Kekalia. “I think this event highlights the functionality of art. It’s not just beauty and expressing yourself.”

Guests took in acoustic entertainment and hula performances with their meal and bid on art pieces in the silent auction.

Molokai resident Vicki Underwood said she enjoyed having a social event in such a beautiful setting. Aside from the chicken tortilla soup, resident Marilyn Schwinn said she also liked the fact that the event drew a wide diversity of people. Underwood selected a bowl molded with grooves for holding chopsticks, while Schwinn picked up a sky blue model with a glaze finish that “looks like it has a smiley face.” 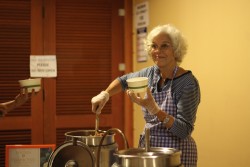 “Mostly I enjoy seeing the people come and have a good time. I don’t really care how much money we make,” said potter Dan Bennett, MAC’s co-founder and treasurer. “… It’s about the same time of the year as the regular Super Bowl, so [the name is] fresh in people’s minds.”

MAC is a nonprofit community art facility that opened at Coffees of Hawaii in 2012, after Bennett and a group of fellow enthusiasts had been operating a studio since 2005 that would become the foundations of the center, according to MAC’s website. Soup’ R Bowl is one of two annual MAC fundraisers and brings in $5,000 to $10,000 depending on the year, said Bennett. Proceeds go back into the art programs, which include such classes as ceramics, jewelry making and painting.