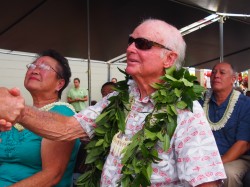 Dr. Paul Stevens was congratulated at the Molokai General Hospital 50th Anniversary after the surprise announcement that the outpatient clinic is renamed in his honor. Beside him is his wife, Marion. Photo by Catherine Cluett

A lot has changed in medical services on Molokai since the mid-1900s — a time when it wasn’t unusual to go into the hospital to get your tonsils out and your doctor would have just come from delivering a baby. Hours before that, he would have removed your neighbor’s appendix.

“People used to think, ‘He’s a doctor, he’s supposed to do it all,’” Dr. Paul Stevens, the island’s oldest physician, said in a 2010 interview. Stevens first came to Molokai in 1956, and has practiced medicine here ever since.

Last Saturday, Molokai General Hospital celebrated its 50th anniversary — as well as remembered all the changes in Molokai healthcare over the years.

The present facility overlooking Kaunakakai first opened its doors in 1963, but its history dates back to the Shingle Memorial Hospital on homestead land in Ho`olehua, according to Molokai’s Dr. Emmett Aluli. Operated for some time by the Episcopal Church, the building eventually began falling apart, and the hospital’s board of trustees was charged with building a new facility.

By pooling their own money and obtaining matching funds from government and corporate sources, Aluli said a new hospital was built where it stands today.

By the 1980s, however, it had fallen into disrepair, he said. That’s when the board attracted the attention of Queen’s Health Systems and Molokai General officially became part of Queen’s in 1987.

“Being part of that history with Drs. Stevens and Thomas has been a humbling experience,” said Aluli. “… [It’s] an amazing story that we’re proud to be part of.”

Eric Yeaman, chair of the Queen’s Health Systems Board of Trustees, said he could feel “how awesome and special this community is.”

“As I look around at this place, there’s a lot to be proud of,” said Yeaman. “This place provides world class services… these are services that people would have to leave the island to get, at one time.”

In 2005 and 2008, additional renovations and improvements were made to the hospital. But it’s not just about the buildings.

“Staff come here every day and they do one thing: they put patients first,” she said.

One person in particular was recognized for his longtime service to the community and the hospital: Dr. Stevens.

“He has served this community professionally and compassionately for over 56 years and still continues to practice today,” said MGH board member Kip Dunbar, adding that Stevens is also an active MGH board member.

Dunbar recalled his first memory of Stevens, sewing up a cut in his forehead as a 12-year-old after he dove into a rock. Stevens sat with Dunbar on the family’s front step, back when doctors made regular house calls.

For his “generosity, compassion and commitment to the Molokai community,” in the words of Dunbar, MGH administration honored him by renaming the hospital’s outpatient clinic the Paul G. Stevens Outpatient Clinic.

To honor the past 50 years of the hospital’s history and look towards the future, MGH Vice President Randy Lite said staff put together a time capsule, now hidden in the hospital’s ceiling, which will be opened on its centennial anniversary in 2063. He said it includes items from the facility’s early days in the 60s, as well as current objects like meal tickets, 2013 coins and newsletters.

Though a lot of transformations have taken place since the hospital’s inception, one thing has stayed constant, said Lite.

“The staff has changed… and the building has changed, but the one thing that has not changed over all these years is the commitment to caring with excellence. That has remained the same.”