On Dec. 29, 2015, the First Hawaiian Homes Federal Credit Union (FHH FCU) closed its doors after being liquidated by the  National Credit Union Administration (NCUA). Located in Ho`olehua, the small building at the corner of Farrington and Pu`upe`elua Avenues served 1,379 members and had assets of nearly $3.2 million, according to the credit union’s most recent Call Report. 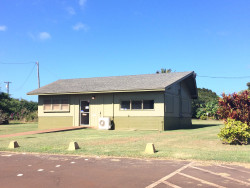 An NCUA press release said the national organization made the decision to liquidate the FHH FCU and close operations “after determining the credit union was insolvent and had no prospect for restoring viable operations.”

John Fairbanks, public relations specialist for the NCUA, said he could not give any additional reasons for the lack of solvency due to confidentiality in protection of FHH FCU members and union.

“In general terms, when a credit union is liquidated, we feel it can no longer continue viable operation on its own,” he said. “Fortunately for [FHH FCU] members, another credit union was willing and available to come in and assume assets and shares, so at least members still have a credit union to belong to, unlike some others.”

The FHH FCU was chartered in 1937 and served homesteaders dating back to the days of the pineapple plantations.

“It served the community and it was good and easy for the homesteaders,” said Bishaw. “[Back in the pineapple days] most of [the workers] put their pineapple money directly into the credit union.”

FHH FCU was the eleventh federally insured credit union liquidation in 2015, which Fairbanks said is not an unusually high number.

Members’ accounts are insured by the National Credit Union Share Insurance Fund, which insures individual accounts up to $250,000. In the case of other closures in the country where another credit union could not assume assets, members shares of the liquidated FCU would be paid out of the share insurance up to $250,000, said Fairbanks. Through he could not confirm if all of FHH FCU’s members transferred to Molokai Community FCU, he said no insurance payouts were made.