Parents, faculty and community members of Kaunakakai Elementary worked hard last Saturday to raise money to keep students cool in their classrooms. Proceeds from the event will go toward school-related needs, including air conditioning, according to Jenn Whitted, the school’s Parent Community Network Center Facilitator.

Hundreds of Molokai residents came to munch on chicken hekka plates and baked goods, while hula and Tahitian dancers and local bands provided live entertainment under clear skies. A bouncy house and dart and ball tossing games kept the kids energized. Meanwhile, the adults got a chance to win prizes from drawings and bid on items in a silent auction that included Maui hotel stays. Whitted said that aside from the booths set up by local vendors and organizations, all of the items for sale were donated by community members. 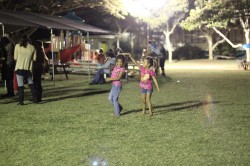 “Anybody who gives back to our children, they’re a part of our family,” said school Principal Janice Espiritu. “… The funds will benefit all children, not just those who can pay.”

Espiritu said the event was inspired by the phrase “No Ka Pono O Na Haumana,” which means “It’s all about the students.” It’s this year’s theme for the school complex that includes Molokai, Hana, Lahaina and Lanai.

Kaunakakai Elementary has approximately 320 students, according to Whitted, and Espiritu said she hopes proceeds can fund the cooling system in at least a few classrooms to start. School officials are also considering photovoltaic panels on the roofs to alleviate the extra cost of air conditioning.