On summer nights, female green sea turtles, or honu, make their way to the beach they were born on about 30 years before. Plodding determinedly to a spot above the high tide line, they dig a hole in the sand with their flippers — sometimes they dig several pits before finding a location they deem satisfactory. There, they lay about 100 white eggs, then use their flippers to cover them with sand. They lumber back to the ocean and slip into the cool dark water, never to see their tiny young that will hatch about two months later and instinctively head for the sea. 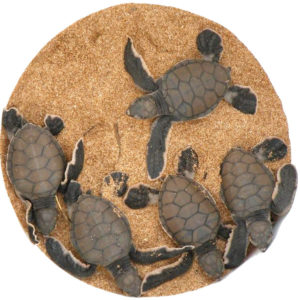 Baby honu hatched from a nest on Papohaku Beach in 2008. Dispatch file photo.

This primordial pattern has been repeating itself for thousands of years, but at Mo`omomi Beach on Molokai, it began in the early 1980s, according to local traditional resource manager Mac Poepoe. He said this year has brought record number of nests — an increase he attributes to his theory that because the first females laid their eggs there about 30 years ago, this would be about the time their offspring would be coming back for the first time to breed at the beach they were born.

Poepoe said he believes there are as many as 50 nests on Mo`omomi this year, increased from his estimate of about 30 last year.

Sea turtle expert George Balazs, a marine biologist with the National Marine Fisheries Service, however, said the numbers can be deceiving.

“Green sea turtles are notorious for ‘false crawls,’” he said, which means crawling around, even digging several holes, and sometimes not actually laying eggs until the next night. “So it’s hard to discern how many of these holes may actually have eggs… There may be three to seven false pits for every one real nest.”

Lil Macmillan, coordinator of a group known as the Molokai Turtle Trackers, organizes volunteers to monitor Mo`omomi daily during nesting season and track the number of nests.

“Let’s not get too excited — its very fun for us who watch the tracks, but we can have a girl come in and dig a lot of holes… but only the turtle knows where she left her eggs,” said Macmillan.

Many factors can make accurate tracking of numbers difficult — including windy conditions that blow sand over the mother’s tracks within a few hours.

“I believe there are no more than three turtles [nesting at Mo`omomi], which is…wonderful and phenomenal,” said Balazs. Each female can lay three to five clutches of about 100 eggs every season from April to August, so even if there are only three turtles, that could mean as many as 15 nests on the beach.

According to Balazs, geneticists have found only thee genetic variations — or haplotypes– of green sea turtles. The third haplotype is the most rare, and that’s the genetic variation found in the turtles nesting at Mo`omomi, he said, calling it “an astonishing place.”

Balazs said he’s unsure whether Mo`omomi’s population is a new colony started about 40 years ago, or whether that’s when restoration of an older colony began. While most females return to nest at the same site they were born, new colonies are formed by a “founding turtle” that breaks the mold and lays her eggs somewhere new.

For Poepoe, who has been caretaking and monitoring the area for decades, his estimates of increased numbers is cause for celebration. Not only does it mean the environment is healthy, it is also a possible reason for de-listing the species from its current status as “threatened.”

Since 1978, green sea turtles have been on the federal Endangered Species Act. Their numbers had decreased worldwide after a long history of commercial over-hunting. In ancient Hawaiian culture, honu were greatly valued and considered by many families to be their aumakua, or symbol of protection. Honu were harvested for ceremony, and certain parts were used as medicine. But since their listing as threatened, it has been a federal offense to harvest turtles.

According to a 1998 Recovery Plan for U.S. Pacific population of honu, one of the requirements for de-listing is documenting an average of 5,000 females estimated to be nesting annually over a six-year period in each stock. Another requirement is that nesting populations at “source beaches” are either stable or increasing over a 25-year monitoring period.

The recent population increase of honu in Hawaii has not gone unnoticed, and several groups have petitioned for the de-listing of the species. One of those was the Hawaii Civic Association in February of this year, according to Asuka Ishizaki, Protected Species Coordinator of the Western Pacific Regional Fishery Management Council. The National Marine Fisheries Service has yet to address the petition, and Ishizaki said the process is currently “stuck in Washington, D.C.”

“Even if we don’t have the 5,000 [population noted in the de-listing requirements], there is plenty of data [to show that the species] is doing very well,” she said.

One Response to “Honu Population at Mo`omomi Thriving”