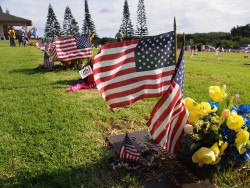 On Memorial Day last Monday, families gathered to place fresh flowers on the markers of loved ones at the Ho`olehua Veterans Cemetery, while local veterans and community members joined in a ceremony to honor the ultimate sacrifice of their comrades and fellow residents. Boy Scouts placed American flags on each grave, which fluttered in the breeze that morning.

While there is sometimes confusion about the difference between Memorial Day and Veterans Day, veteran David Nanod explained that Memorial Day is to remember those who have passed, while Veterans Day honors the living.

During the graveside ceremony, Nanod read the names of Molokai residents who gave their lives in battle, and a bell was rung for each. Ten from Molokai died during World War II, three in the Korean War and five in Vietnam.

“We thought World War II was the war to end all wars,” said Nanod. “But five years later… the Korean War. Then for Vietnam, we were obligated to again send men.”

Veteran Sam Makaiwi, the Molokai commander for both local vet organizations, the Veterans of Foreign Wars  (VFW) and the Molokai Veterans Caring for Veterans, said as a young boy, he never envisioned joining the military. But he served in multiple conflicts and capacities, and reflected on his time in service.

“Let’s not forget what Memorial Day is for,” he said. “We’re here for one purpose, so those of us still living… can laugh, can talk, can be free…. Every night, I still see those missions [I went on during my service.] There were so many empty seats coming home.” 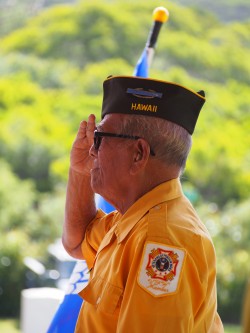 Nanod said he and fellow members of the local VFW used to place flags on the grave of every veteran buried on Molokai each year.

“The VFW lost seven members in the last couple years,” he said. “There was only one name left on the list, and it was mine. There was no one to help [place flags].”

With some graves virtually inaccessible or difficult to locate, Nanod said recently the decision was made to only place flags in the Ho`olehua cemetery. Families wishing to still mark their loved ones’ resting places with flags can pick an American flag at the Veterans Center, said Nanod.

In closing, veteran and owner of Molokai Rainbows, Clay Adachi, released his colored pigeons in honor of those who have passed. They fluttered from their travel boxes and circled over the cemetery before flying home.