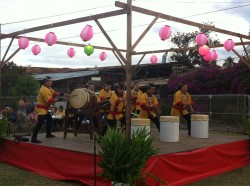 The scene could easily be transpiring in Japan: dancers swaying rhythmically under a sea of twinkling paper lanterns, surrounded by an array of Japanese delicacies, their movements narrated by Buddhist chants. Yet this is no ordinary Japanese festival – this is Molokai’s annual Bon Festival, held two weeks ago on the lawn of the Molokai Guzeiji Soto Mission Buddhist Temple.  Although the scene itself was enchanting and lighthearted, the significance of the celebration was serious: a commemoration of the spirits of loved ones who have passed.

While the Bon Festival is traditionally a time to be reunited with the spirits of the deceased, organizers say the event is also an opportunity to appreciate life and honor Japanese culture and heritage on Molokai.  The event began with a Buddhist ceremony and continued throughout the night with classic Japanese foods including sushi, red bean (azuki) cookies and mochi balls, along with an array of local specialties.

Attendees also enjoyed a drumming performance from an Oahu group called Somei Taiko. As the powerful, mesmerizing beat of the drums reverberated around the lawn, punctuated by Japanese chants, a dance instructor led the crowd in the steps of the Bon dance. Families and friends slowly joined the circle of dancers, with mothers and their giggling children, older couples and teenagers uniting to share appreciation of the Japanese culture and heritage.