Honoring kupuna is one of the age-old traditions that’s part of Molokai’s cultural DNA. One way residents have recognized the service of kupuna is through the election of an Honorary Mayor of Kaunakakai. The tradition has evolved over the past century –it’s been hosted by a variety of organizations, passed down in many versions of oral history and has even been memorialized in a nationally-known song. 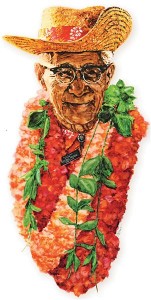 An artist’s rendition of Mitchell “Papa” Pauole on a commemorative posted presented to his family by the Bank of Hawaii.

Probably the best-known Honorary Mayor was Mitchell “Papa” Pauole in the mid-1900s, a well-loved Molokai resident who embodied the aloha spirit, greeted visitors at the airport, and served the community in many capacities. But the tradition of Honorary Mayor began long before Papa Pauole, according to Halawa resident and cultural practitioner Pilipo Solatorio.

‘The Cockeyed Mayor’
A song about Kaunakakai’s mayor that gained a national audience was written after Warner Baxter, a movie star who played the Cisco Kid in the 1928 film “In Old Arizona” visited Molokai. The story of his arrival on Molokai was told to Solatario by kupuna and author of “Tales of Molokai,” Harriet Ne, who was a hula dancer at a lu`au to welcome Baxter.

“When people of Molokai heard about [his coming], they were so happy,” said Solatorio. “They knew him as guy who rides the wild horses.”

Molokai residents awaited his arrival at wharf with much anticipation. They threw a big celebration lu`au in his honor, where Baxter got drunk, or “cockeyed.” Because of his stardom and status as an honored guest of Molokai, Baxter was dubbed the Honorary Mayor.

The whole tale is recounted in the famed song, “The Cockeyed Mayor of Kaunakakai,” written by R. Alex Anderson, who, according to Molokai Dispatch archives, had many friends and family living on Molokai. The lyrics read in part: “He wore a lei and he wore a smile/ He drank a gallon of oke to make life worthwhile/ He made ’em laugh until he made ’em cry/ he was the cockeyed mayor of Kaunakakai…”

The Molokai Jaycees
While Baxter was named mayor of Kaunakakai for his fame, the town’s next Honorary Mayor was elected for very different reasons. By the mid-1900s, the Molokai chapter of a statewide organization of young men called the Junior Chamber of Commerce, or Jaycees, were organizing community service events on the island, one of which was election of Honorary Mayor. The Jaycees ran a basketball program for youth, and many annual events such as a community carnival, Miss Molokai pageant, baby contest, a Christmas light parade where they would give away about 1000 gifts all purchased by the organization, according to Ralph Kanemitsu, owner of Take’s Variety Store and a former Molokai Jaycee.

The Jaycees would also put on a New Year’s fireworks show in the mud flats just west of Kaunakakai, said Kanemitsu’s wife, Carol.

“You’d see them running like little menehune [when they set off the fireworks],” she recalled.

The first Honorary Mayor the Jaycees elected was Pauole. Born in 1888, he was “known all over and loved by many,” according to his granddaughter, Beverly Pauole-Moore. Residents remember him greeting people as they arrived at the Ho`olehua Airport, a service he performed for years. He was also a kahu, or priest, and officiated many marriages on the island.

“He wasn’t a rich man, but did [community service] out of love,” said granddaughter Cookie Helm.

“He was a true Molokaiian with aloha spirit,” Solatorio said of Pauole. “No one can replace that. He would wave to every car that went by.”

For years, Papa Pauole held the title of Honorary Mayor uncontested, said Solatario. Then, in 1971, Pauole was getting older, and encouraged Solatario, then about 30 years old, to enter his name for the title.

“Papa Pauole liked me because I was involved in the culture; he told me to run and helped me understand the responsibilities,” said Solatorio. “He told me, ‘You are Hawaiian, you’ve got to walk the talk, and be a person whose actions portray Hawaiian culture.’”

Solatorio was elected Honorary Mayor from 1971 through 1974. As such, his duties included representing Molokai, meeting tourists at the airport, greeting and entertaining dignitaries and speaking on behalf of the island. He said even though it was a volunteer title, he had to sign a contract-like document agreeing to the responsibilities.

Solatorio said during the time he served as Honorary Mayor, he traveled to places like San Francisco, Los Angeles and even Tijuana, Mexico to promote tourism to Hawaii. He said he also helped the community. For example, when one family’s home burned, Solatorio said he asked the county for assistance to start an organization to help such families in need, and fellow residents donated everything the family needed to start fresh.

Kanemitsu said the Molokai Jaycees dissolved about 30 years ago, adding that times have changed since then.

Continuing the Tradition
The tradition of Honorary Mayor didn’t stop with the Jaycees, though.. A 1986 Dispatch issue confirms that Rose May Enos-Ku was nominated during Aloha Week that year. In the Feb. 1, 1990 issue, it was noted that Enos-Ku was one of two Molokai residents to travel “to Seattle as the representatives of Molokai in a city wide promotion of Hawaii.”

Ella Alcon, who helped organize Aloha Week in the 90s, remembers Enos-Ku as a “sweet person.” “Everybody loved her — she was really Miss Aloha,” she added.

While other residents may have been elected Honorary Mayor during Aloha Week over the years, the Dispatch has not been able to confirm any names.

Then, in the late 90s, the Molokai Visitors Bureau put on an annual event during which an Honorary Mayor was elected, according to Kammy Purdy, who worked for the organization. She said residents voted by ballot, and during this process, Kili Mawae was chosen for the role.

Dispatch archives confirm that in 1999 and 2000, Mawae held the Honorary Mayor title.

“At 8 a.m. one morning, they called me, and told me, ‘Good morning, Mr. Mayor,’” said Mawae, Though he was never instructed in any responsibilities of the position, he said he does what he can to help others.

“It’s the people that make Molokai what it is. I always take people fish, if they need help… It’s good to share — anybody come, I give you. That’s my style.”

Revival
With no elections for Honorary Mayor held over the last 10 years, Molokai resident and owner of Kalele Bookstore Teri Waros thought it was time to revive the tradition of honoring the island’s kupuna. During the first ever Ho`olokahi e Mahalo Molokai Festival to be held on Nov. 17 at the Mitchell Pauole Center, the building named after one of Molokai’s most respected Honorary Mayors, the tradition will continue. Residents will have the opportunity to vote for Honorary Mayor by bringing pennies to support their favorite kupuna. The kupuna who collects the most pennies wins, and will donate the proceeds to the charity of their choice.

“All [our kupuna] work so hard and show that with compassion and communal effort, we come together,” said Waros. It’s our kupuna who keep teaching us these lessons. [Voting for Honorary Mayor is] just a chance to say thank you.”