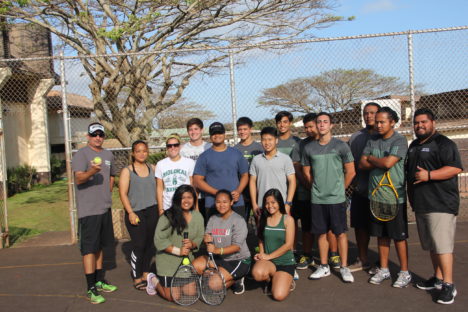 The Molokai Boys Tennis team beat Baldwin with a 3-2 score twice last weekend while hosting the Baldwin High School tennis team. While the boys won both their Friday and Saturday matches, Molokai’s Girls Tennis team finished with losses in all five matches at the Molokai High School courts in Ho`olehua. Friday’s match was suspended by darkness and finished up on Saturday morning.

Head Coach Amanda Labriola, in her first year as head coach for tennis, was happy with her team’s performance. 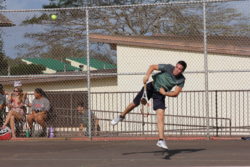 “The matches this weekend went well,” she said. “The season is off to a good start… I’m excited to see where the season takes us.”

Kanahele Montizor, who was the head coach last year, was on hand to help with the team one more time before he leaves to relocate to the mainland. His student athletes honored him after Saturday’s match.

“What amazing matches these last two games of my career as Molokai’s Varsity Tennis Coach,” he said. “The kids played so hard this weekend. Although my girls fell both days 5-0, my boys came out on top 3-2! They sent me off with a victory against a D1 team and that was amazing! I wish them all the luck and to push hard and have fun for the rest of the season!”

Labriola said his absence will be felt.

“We will all miss Coach Kanahele on the courts every day, the players especially,” she said.

Molokai will travel to Maui this weekend for matches with Kamehameha Maui and King Kekaulike.