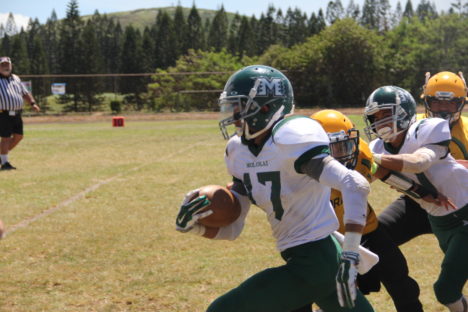 The Molokai Farmers eight-man football team won their home opener this past weekend beating Hana 74-10 in front of a great crowd at the Molokai High School field. The Farmers are the defending Maui Interscholastic League Eight-Man Champions and they will travel for the next two weekends for games at Lanai and Seabury.

Senior quarterback Jayden Dudoit-Tabilangan led a potent Farmer offense as he was 5-6 for 137 yards with two touchdown passes, one to Decker Bicoy and the other to Kairos Torres-Umi. He also ran for another. Jayse Lalim-Rillon and Nalima Puaa-Aki both had two rushing touchdowns. Hauoli Caparida had a kickoff return for a touchdown and Kaimana Escobar and Makani Kaneaikala both had rushing touchdowns.

“after putting in the hard work on the field and in the classroom, and months of practice, [the] win against Hana was a huge confidence boost and reestablishment of intensity,” said Bicoy. “My teammates did an awesome job, but there is always room for improvement. Our next focus is Lanai.”

The Farmer defense was solid and held the Dragons to only 10 points. Cody Stone led the team with eight tackles. Molokai’s defense led them last year to an undefeated season and a win over Seabury in the championship game.

Head Coach Mike Kahale was pleased with his teams first game of the season.

“That was a good first game for us and most of our athletes got quality reps and it gave an opportunity for individuals to step and perform,” he said. “Overall, I was pleased with our performance.”

Dudoit-Tabilangan started his first game at quarterback and his coach was pleased with his performance.

“Offensively we moved the ball well and we had close to 300 yards rushing and 6 different backs scoring touchdowns,” said Kahale. “Jayden did well and he threw a couple of really nice deep balls.”

Dudoit-Tabilangan summed up what the sport means to him.

The Farmers will be on the road the next two weeks at Lanai and at Seabury. If all goes well, Molokai hopes to host a semi-final playoff game here on Molokai on Oct. 22. The MIL championship game is scheduled for Oct. 27 at War Memorial Stadium on Maui.